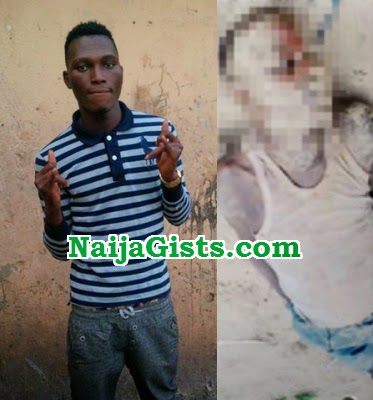 A young Muslim cleric, Taiye Bamidele, well known as Alfa died over the weekend after consuming a mixture of traditional stomach upset drug sold to him by a vendor in Festac area of Lagos.

A police source said Taiye was resident in Ondo State and had come to Lagos on a visit when tragedy struck.

He said, “There are three friends involved in this case. The deceased lived in Ondo State, while the other two are living in Lagos.

“The two in Lagos travelled to Ondo to join Taiye for the naming ceremony of another friend, who was living in Idi-Iroko.

“All the three friends returned to Lagos on Thursday, last week.

“The following day, which was Friday, Taiye said he had a stomach upset and they went to get him some herbs to treat the ailment.”

It was learnt that he was served a mixture of jedi-jedi and ‘small leaf’ which were soaked in alcohol.

Our correspondent learnt that after the victim took the drink, he started acting strangely.

A relative said his friends stated that he was laughing hysterically and talking out of senses.

He said, “He started by laughing at everything they were saying and they didn’t understand what was happening.

“Later, he touched the private parts of one of them. When they tried to hold him, he ran out of the house.”

In the process of running, it was gathered that Taiye fell and injured himself in the head.

He was said to have continued his flight, but was later found with the security men at the entrance into the estate. The men explained to his friends that Alfa had lost his mind.

The security guards reportedly chained Alfa and handed him over to his friends.

Our correspondent was told that he gave up the ghost early Saturday morning.

A source said, “Around 3am on Saturday, he died. People called his name, shook him, but he did not respond.”

The herb seller, Bilikisu Ayilara, said she did not know anything about the death of the victim.

She said, “I have been selling herbs for a long time and I have never had problems.

“I don’t know the man that died. His friend usually patronised me. He came that day and said his friend had a stomach upset.

“I gave him jedi-jedi and small leaf and that was all. It was later I learnt the man who took it ran mad and died. I am innocent.”

The victim’s father, Olaiya, appealed to the police to release his son’s corpse to him.

He said he was not ready to pursue a case against the suspects.

He said, “I don’t think it was the herb that killed my son. Although he did not have any mental problem before coming to Lagos with his friends, he died because it was his fate.

“All I am interested in is for the police to release the corpse of my son to me and release the suspects.”

[By Samson Folarin, Metro Plus]