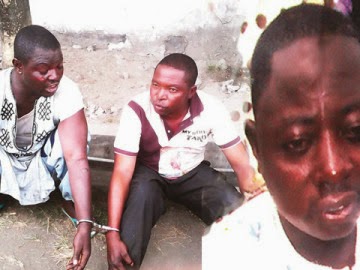 Victim on the right

An Islamic cleric based in Badagry area of Lagos, Mr Fatai Afobaje had been arrested for killing his best friend Rafiu Suleiman for money ritual.

According to police report, after killing the 40-year-old victim, the Alfa and his accomplices shared his body parts for ritual purpose.

Police recovered the remains of the Kwara-born victim after an extensive search on Monday at Oko Agbonla, Magbon in Badagry.

According to police, the suspect planned the victim’s murder with the help of a vigilante group leader in the area, Tanko. The victim Suleiman was murdered last Friday night.

A close source to the suspect said he met the victim several years ago in a commercial bus and offered to pay his transport fair when the conductor was about to embarrass him because he had no change.

“The Alfa then said he would like to know him better for being so gracious to him (Alfa). So, Suleiman gave the Alfa his address and asked him to visit.

“That was how the friendship started. From what we found out, Suleiman, who worked as a crane operator, would collect his salary and give half of it to Alfa at the end of the month and that happened for a long time.”

The victim was called by Alfa to come for a meeting around 8pm.

“As soon as the victim got to the street’s gate, the security guards surrounded him and asked who he was looking for. When he told them, they flogged him with charms and he died.

“They then called the Alfa to come and when he arrived, they shared his body parts. While one collected his head, another demanded all his intestines, while another asked for his breasts, which were given out.”

We learnt that when the victim’s boss did not find him, he made a call to his wife, who explained that she had yet to also see him. His boss was said to have contacted policemen from the Morogbo division who then launched a search for him.

Wahab said, “We went to the house, but he was not around. We searched everywhere and didn’t see my brother. Later, we saw a mutilated corpse floating on a stream near the house. It was swollen and there was no head. The breast had been cut off.

“We went back to the house and as we looked around, I saw some fingers in a pot which were still being burnt and when I saw them, I could recognise that they belonged to my brother.”

The police were said to have apprehended the suspect, and he reportedly named the chief security officer as an accomplice.

Afobaje, when queried, owned up to the act, saying he divided the body with the other suspects.

He said, “He was on his way to my house when he was killed. When I got there, he had been killed and then we shared his body. I urge my accomplices to also confess because the act has been uncovered and there is nothing we can do about it.”

He said, “The decomposing corpse of the victim has been recovered, while Alfa Fatai has been arrested.

“The matter has been transferred to the State Department of Criminal Investigation, Yaba.”

What did Suleiman do to deserve this kind of horrible death???

The heart of man is desperately wicked… Who can know it..