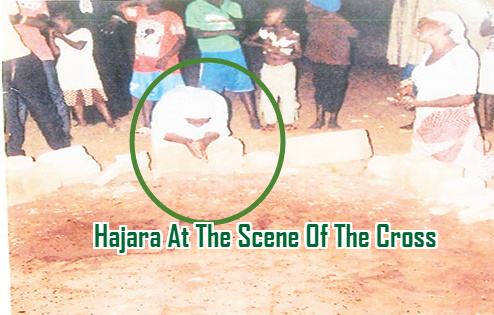 A young Muslim girl identified as Hajara Hussaini who was the first person to see a cross around Assakio Central Mosque in Lafia LGA of Nasarawa state has been secretly dragged away by her family.

15-year-old Hajara, a family member of the Assakio Chief Imam was the first person to discover the cross near the mosque before turning the place into a spiritual healing ground.

Hajara was a Christian before she was taken to Bauchi where she converted to Islam alongside her biological father.

Hajara who is currently kept at a secret location in Bauchi to avoid tarnishing the image of the Chief Imam of Assakio is now on hunger strike.

She is reportedly pleading with her parents to allow her to return to Assakio to accomplish what God had directed her to do before the cross.

She was forced out of Assakio after she prayed for some white men who visited the site of the cross last week.

Hajara sighted the cross on the 28th of September 2016 while playing with two other girls.

She quickly reported the incident to her parents and drew the attention of others to the scene.

Since then, the place has become a miracle center.