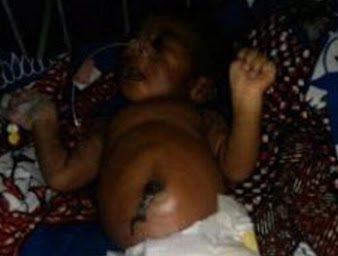 Another jealous step mother has been arrested in Niger State.

The unidentified suspect said to be the second wife of her husband reportedly poisoned the above 7-day-old baby boy with Sniper insecticide after suffering miscarriage due to a physical combat she had with his mother.

Some weeks before the mother of this baby puts to bed, the suspect had a physical fight with his mother. 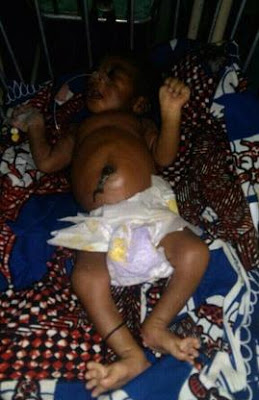 The evil step mother reportedly suffered a miscarriage and since they she had planned to take revenge after his co-wife gives birth.

After reconciliation with her co-wife, the step mother pretended all is well and was very obedient and loyal to the first wife. When she finally gave birth, she cuddled, played, bathed and treated the young child as if it is hers and that gave her the opportunity to fed the child with sniper.

The suspect has been arrested while the baby is still clinging to life at IBB hospital in Minnar Niger State.