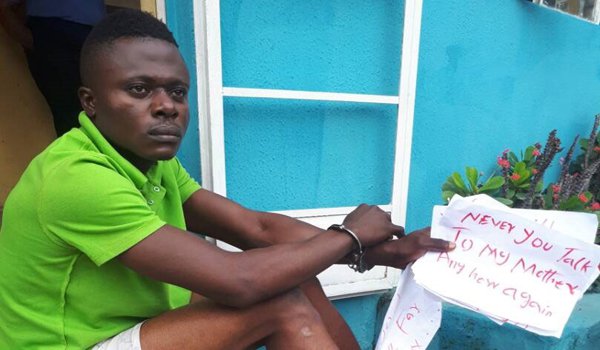 A Nigerian man has been arrested for allegedly killing his Chinese boss in Lagos.

The suspect identified as Amos Okechukwu, a casual worker at the company headed by the deceased was said to have sneaked into the residence of his boss at Tayo close area of Akionola Cole Estate in Ikeja on Friday around 8pm where he suffocated her with a pillow.

The deceased identified as Alice Xu died of suffocation before the suspect ransacked her house and stole N800,000 and 2000 US Dollars.

He was arrested by suspicious estate security guards while leaving Akinola Close Estate estate disguised as a mad man around 10pm on Friday.

After his arrest, the security guards contacted the deceased with no response. After some minutes of repeated calls without response, some guards were  sent to the deceased home where they discovered she had died.

A cardboard with the inscription “Never you talk to my mother any how again” was found on the bed of late Alice Xu. 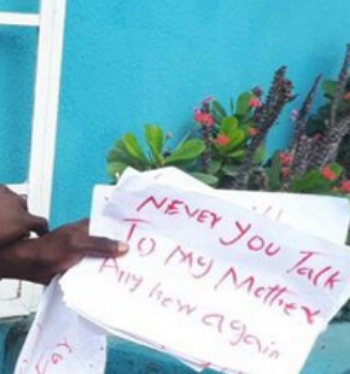 During interrogation, the suspect confessed that he killed the deceased to teach her a lesson for frequent verbal assault on his mother

Here is what a security source at Adeniyi Cole Estate said about the suspect. 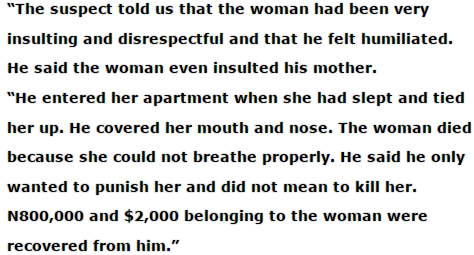