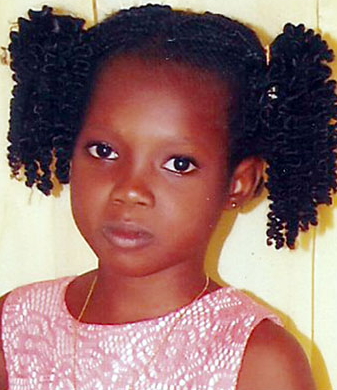 Left to grow up with her grandfather at his Idumegbede Quarters Iruekpen Ekpoma residence, Favour, according to neighbours, lacked many things as her aged guardian could do very little to fend for her needs. This, they added, made life quite difficult for the little girl.

Speaking to our reporter on why he decided to give out little Favour up for adoption, Pa Airiohuodion said he can no longer afford to keep the little girl with him as he is unable to meet her needs. He regretted that her son, who is Favour’s biological father, has refused to look back since he left the girl with him.

The octogenarian said apart from the financial burden of taking care of the child, he is daily getting weaker physically. Consequently, he is afraid that soon, he will not be able to take good care of the child he described as “very smart and hardworking.”

“I am sad that Kennedy my son, who is Favour’s biological father, has refused to look back since he left the girl with me. He left her over six years ago and went away. I am yet to see him since then. I am not able to meet all the needs of the little girl and I am not happy seeing her in need.

“Also, I am daily getting weaker physically. I am not as strong as I used to be when I was younger, so I am afraid that soon, I will not be able to take good care of Favour, who is a very smart and hardworking child. That is why I want to put her in the care of parents who will adopt her and take good care of her,” he said.

We also gathered that Favour’s mother, who was never married to Kennedy, may have also chosen to abandon the poor girl like the father, as she is never known to have visited or asked of her since. It was also learnt that she may have travelled out of the country few years back without bothering about her daughter.

Favour, a junior primary school pupil, currently attends Deed Royal Academy, a private school situated in Ukpenu area of Ekpoma. Insisting that Favour has been abandoned by her biological parents, Pa Airiohuodion said his desire is to see the girl legally adopted while he is alive, as his son’s whereabouts is unknown to him.

“I want tell the whole world that Favour Airiohuodion has been abandoned by Kennedy my son and the woman who gave birth to her for him. I have not seen either of them for six years now and my desire is to see the girl legally adopted while I am still alive, as my son’s whereabouts is unknown to me,” he explained.

Chicago Funeral Home Shootings: 4 Killed, 2 Wounded Outside West Side Funeral Home
Nigerian Gay Student Who Posed As Lady To Dupe 33 Men On Instagram Has Been Arrested