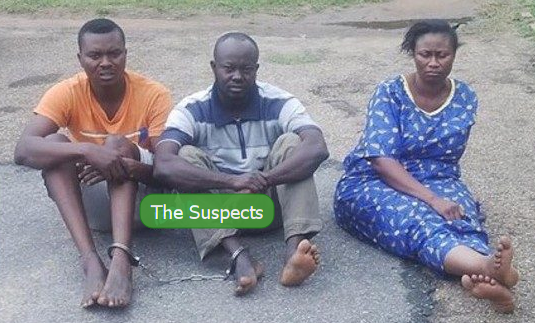 A 37-year-old woman has been arrested for staging her own abduction in order to convince her American husband that life in Nigeria is hard.

Meet Bukola Ogun who staged her kidnap in Ibadan on the 4th of July 2017.

The fake kidnappers she hired stormed her home on the aforementioned date at 7:45pm and kidnapped her. 4 hours later, they called her husband to demand N10million ransom.

Sadly, the bubble bust when the fake kidnappers Olalekan Anafi and Kayode Adepoju were arrested by police. They later confessed that madam Bukola Ogun hired them.

On hearing of their arrest, Mrs Ogun left the hotel where she lodged herself in Imalefalafia area of Ibadan.

She told police she planned her own abduction to make her husband see reasons why they should relocate to the United States.

Her husband, a citizen of the United States returned to Nigeria after securing a job at the Nigerian stock exchange. He married Bukola Ogun 6 years ago and the couple have two children.

Here is what her cousin, Kayode Adepoju who was one of the fake kidnappers said:

Unknown to Bukola Ogun, her husband had already started the process of relocating them to the United States before she kidnapped herself.

This is what happens when people run ahead of God.