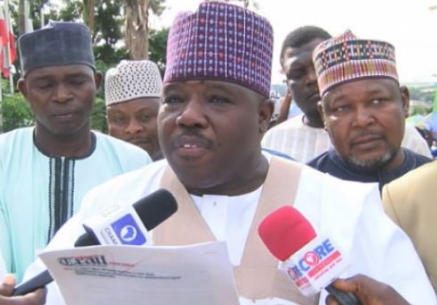 Alimodu Sheriff, the former National Chairman of the Peoples Democratic Party has said that the party has been returned to those he described as treasury looters.

He also denied media reports that he had congratulated the Chairman of the party’s National Caretaker Committee, Senator Ahmed Makarfi, over his victory at the Supreme Court on Wednesday.

The Supreme Court had in its judgment, upheld the constitution of the caretaker committee and endorsed the removal of Sheriff at the party’s national convention, held in Port Harcourt, Rivers State, in May 2016.

The judgment, therefore, ended the 14-month battle for the leadership of the party, which was the country’s ruling party from 1999 to 2015.

Sheriff, who spoke through the spokesperson for the National Working Committee sacked by the Supreme Court, Mr. Bernard Mikko, said it was wrong for the Makarfi-led caretaker committee to have said the PDP would grant him and members of his former executive committee “amnesty”.

Others in Sheriff’s camp include the party’s former National Secretary, Prof. Wale Oladipo; Sheriff’s deputy, Dr. Cairo Ojougboh, and some members of the National Assembly.

Continue Reading
You may also like...
Related Topics:modu, sheriff