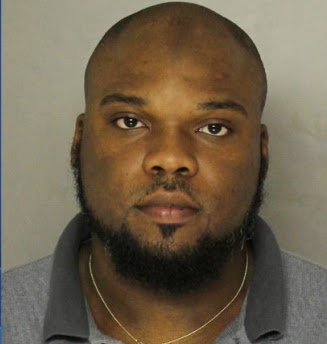 Pictured above is a 29-year-old Nigerian man identified as Samuel Okorie who currently lives on Fallowfield Avenue in Brookline area of Pittsburgh.

The man whom neighbours described as a quiet man was accused of kidnapping a 21-year-old lady from a gas station on West Liberty Avenue and then raping her.

Samuel Okorie was arrested on Sunday morning at his home after a lady ran to his neighbour to complain about him.

According to police, the lady said Samuel approached her from behind at a gas station, grabbed her cell phone and pushed her into a nearby bush where he raped her before dragging her into his home where the rape continued (How possible???).

The lady told police she later escaped and ran to a neighbour’s home on Sunday morning.

Hear what the neighbour told police: “the girl had her shoes in her hands and was shaking uncontrollably, screaming, ‘Help me! Help me!’”

“The girl started crying louder and louder, yelling, ‘He raped me and he’s going to come and get me,’” .

The woman called 911 immediately, and police came over to arrest the alleged rapist.

Samuel Okorie had been jailed in Allegheny county jail after he couldn’t meet his $150,000 cash bail. His hearing is scheduled for next week Monday.

Chei, this world oooo, when he was dragging her at the gas station, how come nobody called the police.

Then what about the surveillance footage from the gas station? Hope this is not another romance turned sour story.