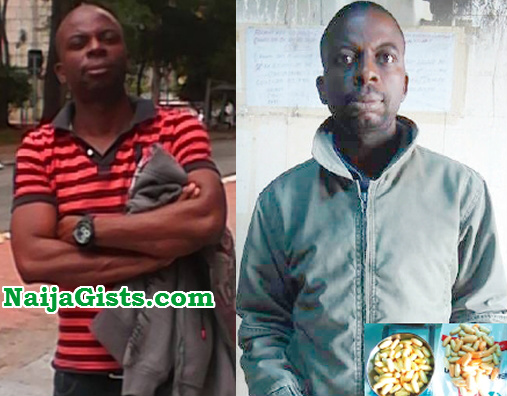 Sept 24, 2015 – Picture: Nigerian Man Who Returned From Brazil For Traditional Wedding Arrested With Cocaine Drug In Lagos By NDLEA

A Nigerian waiter who was arrested for alleged drug trafficking, has implored his wife-to-be to forgive him since he would not be able to make their planned traditional wedding anymore. The suspect, 39-year-old Okpue Ernest Ifeanyi came to Nigeria from Brazil for his traditional wedding, but was arrested by operatives of the Drug Law Enforcement Agency (NDLEA) for being possession of suspected wraps of cocaine.

Ifeanyi confessed that he was paid N400,000 to take 59 wraps of cocaine to Nigeria. He said that he decided to take the deal because he wanted to add more money to his already planned wedding.
The groom-to-be said that he suspected someone cast a spell on him, for he could not understand why he jeopardised his planned traditional wedding and dashed his betrothal’s happiness because of N400,000.

Ifeanyi, who has lived in Brazil for a year, said: “I work in a restaurant in Brazil.
I sincerely want to get married and have a family. In the process of trying to make more money, I was given 59 wraps of cocaine to take to Nigeria for N400,000. Now I realised I have made a big mistake. I pray my woman will find a place in her heart to forgive me. I feel I’m under a spell.” Arrested along with Ifeanyi are Okonkwo Daniel Anagor, 26, Lawal Monsuru Ademola, 33, Ogbonna Donatus Chigozie and Okoro Chibueze Augustine.

The Head, Media and Publicity of NDLEA, Mitchel Ofoyeju, said the suspects were caught at the Murtala Mohammed International Airport (MMIA), Lagos, for unlawful possession of 10.255kgs of narcotics hidden in garri (West African food made from cassava) and luggage. He explained that Ifeanyi and Augustine were coming from Brazil with cocaine, while three others were going to South Africa, Dubai and Pakistan when they were arrested.

The NDLEA Commander at the Lagos airport, Mr Ahmadu Garba, said: “Anagor was caught with 2.810kgs of Tramadol on his way to Dubai. Ademola was arrested with 3.310kgs of methamphetamine on his way to South Africa, while Chigozie was caught attempting to smuggle 610 grams of cocaine to Pakistan. Two other suspects, Augustine and Ifeanyi were caught with 2.575kgs and 950 grams of cocaine from Brazil.”

Anagor, who was to board Rwand Air flight to Dubai, told investigators that he wanted to spend some time after his secondary school and further his education in Dubai. His ambition has, however, been scuttled following his arrest as well as criminal charges of drug exportation against him by the agency. He said: “I was travelling to Dubai to spend holiday and further my studies but they called me from Dubai that somebody will give me garri in Lagos.

When I got to Lagos, the person called me and gave me the bag of garri. “At the airport, the garri was searched and 445 sachets of Tramadol were found inside the bag. That was how I was arrested.”
Ademola, a trader selling clothes at Marina Lagos, holds a diploma in Computer Installations and Repairs from the Lagos State Polytechnic. His journey to South Africa was aborted as 3.310kgs of crystalline substance which tested positive for methamphetamine was found in his possession. The drug was neatly packed in 26 parcels in a false bottom of his luggage. Similarly, Chigozie was nabbed with 610 grams of cocaine while attempting to board an Emirate flight to Pakistan.

Augustine, who was expecting N2.5 million, described his arrest as a bad luck. He said: “I have lived in Brazil for a year and six months. I have suffered trying to make ends meet in Brazil. I got involved in drug trafficking so as to start a legitimate business. “I expected to have made N2.5 million from the deal.

Unfortunately, my partner who would have collected the drug in Dubai failed to show up so I had to come to Nigeria with the drug. That was not the original plan. This is a bad luck and I feel so sad.”