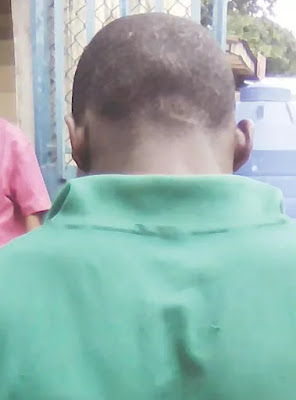 Mfom John, a 27-year-old Indian hemp addict has been arrested for killing his twin brother, Israel John in Somolu area of Lagos on Monday.

The suspect told police a spirit pushed him to commit the murder.

“We went to buy a generator, along with one of our friends at Bariga Market on Sunday. When we came back, we went to a beer joint to drink. Later, we all went back home, ate and slept together. “The next morning, our friend, Friday, went outside. I decided to go and join him outside. My brother was sleeping. As I was about opening the door, I felt someone attempted to blindfold me from behind. In the process of defending myself, I grabbed hold of a kitchen knife. The knife was on top of the table. I headed straight to where my twin brother was sleeping and stabbed him several times. It was after the incident that I realised what had happened.”

“Israel is my warlord. I cannot stay alone. I want to go and meet him wherever he is.”

Ola Balogun: I Walked Out My Movie Premiere After A ‘No-Name’ Filmmaker Insulted Me
Woman Kills Father In Akwa Ibom Over Witchcraft Allegations, Says He’s Behind Her Sickness