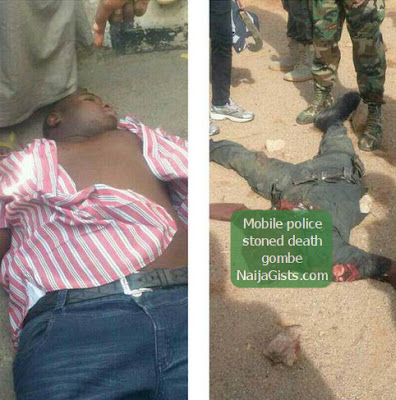 A mobile policeman identified as Adamu Abba was stoned to death by a angry mob today in Gombe after he allegedly shot and killed a Keke Napep (Tricycle) operator who hit his bike.

The 38-year-old victim was heading to work on his bike today when a Keke Napep operator hit him by accident at Bello Sabon Kudi junction in Gombe.

An argument soon started between the two. Trigger happy corporal Abba reportedly reached for his gun and shot the tricycle operator, 37-year-old Mallam Gana in the stomach killing him on the spot.

Adamu Abba quickly took to his heels and ran into the office of Secretary of Gombe Emirate Council for safety when the other tricycle operators descended on him.

The angry mob forced themselves into the office of Gombe Emirate and stoned the trigger happy mopol to death before his colleagues arrived.

Many residents of the area defended the action of the tricycle operators.