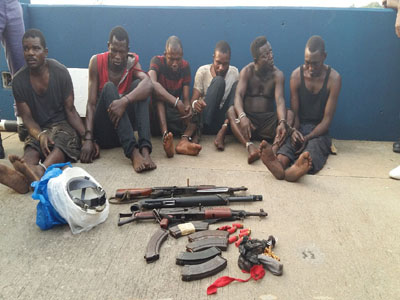 The pirates, who were nabbed in the Island of Sao Tome on February 20, were said to be part of a nine-man gang that hijacked a Saudi Arabian oil tanker, MT Maximus, chartered by a South Korean company.

One of the suspects was killed during a fierce gun battle with naval operatives onboard NNS Okpabana. Two others were said to have earlier fled the vessel with two crew members as hostages.

It was learnt that the vessel, which was renamed MT Elvis-5 by the hijackers to conceal it, was loaded with 4700 metric tons of AGO.

The vessel hijacked an oil boat, Dejikun, at the Lagos Port, sacked its crew members before using it for their illicit operation.

Dejikun is said to be a popular oil boat at the Apapa port, owned by one Charles, who resides in Lekki.

The Nation gathered that an American vessel, which witnessed the hijack, initially chased the ship until it turned Southwest towards Togo.

Unable to continue the chase, the American ship was said to have radioed Togolese Navy to take over.

Okpabana and Sagbama were deployed from Lagos. Centenary went through the nation’s central waters, thereby smoking the hijackers at a corner on international waters, off Sao Tome.

Before the security forces could get to the hijacked vessel, it was learnt that two crew members, including an Indian, were kidnapped and taken away by two of the gang members.

Upon sighting the naval ships, the hijackers, who allegedly refused to surrender, shut down the oil tanker and opened fire on the security agents.

But the Naval operatives were said to have forcefully boarded the tanker.

The Nation gathered that it was at that point that the deceased pirate was gunned down because he allegedly came out of the ship to confront the boarding party.