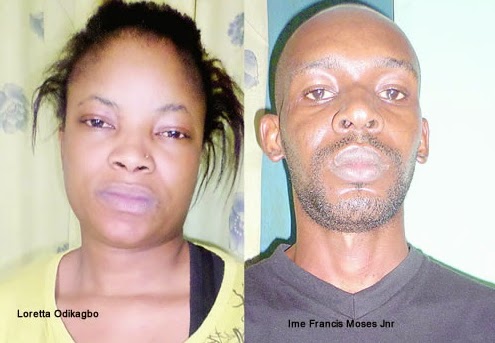 A young man, Charles Bankole Orisanya, who hails from Akoko in Ondo State, and works with Halliburton in Rivers State has been gruesomely murdered by a 26 year old lover, Loretta Odikagbo, he met on social network Badoo.

He was murdered on the 19th of September but she was arrested three months after, December 9, 2014 after a painstaking investigation by the Homicide Section of the Rivers State Police Command.

Senior police officers who spoke to Tribune Newspaper said, Miss Odikagbo and two accomplices tapered late Orisanya’s mouth, hands and legs before covering his head with a polythene bag. After which she sat on the deceased’s head while one of the accomplices, Ime Francis Moses Jnr held his neck until he became lifeless.

Miss Odikagbo, a student of Rivers State Polytechnic, Bori, reportedly met Orisanya on Badoo network and they started dating online. They connected physically and the relationship blossomed over the next months.

However, on September 19, 2014, when the lover invited the lady to his house, she hired two men to go with her and hid them under the staircase of the lover’s residence.

“In order not to arouse any suspicion, Loretta released herself totally to her lover and engaged in a passionate love making session with him. After the man climaxed, he rolled off and got ready for sleep. The lady was said to have quietly opened the door to let the two accomplices in. Pointing a gun-like object at Bankole, Loretta and the boys used a rope and masking tape to tie his hands and legs.

Satisfied that she had dealt with her lover, Loretta left for an Automated Teller Machine to collect all the cash in Bankole’s account. Of course, she had earlier collected the secret pin from him under duress. Not done, the lady was said to have returned and had gone to her lover’s kitchen to pick a polythene bag to cover his head after taping his mouth, and sat on his head. One of the accomplices, Moses, held the man’s neck until he gave up the ghost. The two men also took their victim’s shirts, shoes and other personal items while Loretta went for his LG phone and laptop.” The police officers revealed.

Narrating how she carried out the act, Loretta said”

“I met Bankole (Orisanya) through a social network called Badoo in January 2014 and we got intimate online since he was at the rig offshore when we met. He was there for two months and we became internet lovers. We were chatting and exchanging pictures. When he came back, he invited me over and we started dating.

“The basis of it all was money. When I met him, it was all promises upon promises. Along the line, the sex was going on and the money was not coming. He would give me N10,000, N15,000 but that was not what I expected from him. Also when we first met, to me, he was a single man but along the line, I discovered he was married.

“We talked about it but he didn’t want the affair to end. He said that it would not be a problem and he could handle it. But I only continued with him because I was waiting for the promises to be fulfilled. I was not interested in marriage to him. We had a bit of misunderstanding concerning money and our relationship. I asked my friend who is also my in-law to help me so that I could get the money forcefully from Bankole.

“Along the line, I could not control my anger so I asked my in-law to come help harass him to get what I could get from him and move on with my life.
“On a particular night, he called me and I went to his place with my in-law and one other guy. I felt it was an opportunity to deal with him. We went to his residence and I managed to sneak the two men into the compound. I hid them under the stairs. I went in to Bankole and we made love. After we were done, I left him in the bedroom and went to the kitchen as if I wanted to drink water, and let the guys in. I made it look like both of us were being robbed. We met Bankole in the sitting room; probably trying to know what kept me away for long.

“There was no light. I didn’t see any gun. My in-law was holding a tape while the other guy held a torch and something that looked like a gun. Bankole and I went on our knees and the guys were threatening us, asking for money. My lover told them that he had money in his account so he gave them his ATM card pin number.

“My-in law tied his hands with the tape and second guy acted like I had to be the one to follow him to the ATM. It was raining heavily that night. It was almost midnight. We left for the ATM and I withdrew a little over N120,000 and paid the guy off. I gave him about N30,000 or thereabouts. My in-law came to meet me at the ATM and I also gave him almost N50,000.

“I took Bankole’s LG phone while his laptop was brought to me the following day by my in-law. I can’t remember what the other guy took from Bankole’s house. I didn’t know anything about the polythene that was used to cover his head.”

“I didn’t have the intention of dating him anymore; I just wanted to move on. I only knew about Bankole’s death when I was arrested.”

The Police Public Relations Officer in Rivers State, DSP Ahmad Muhammad, confirmed the story, saying that the case was still under investigation at the Department of Criminal Investigation.