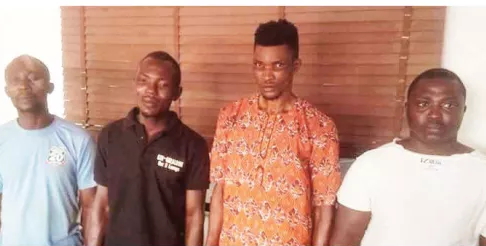 The staff member of a construction company who allegedly kidnapped their boss, Hang Kumming have been arrested.

On why they kidnapped the Chinese National, one of the kidnappers, 26-year-old Amos Loco said:

“My boss is too wicked. He used to cut salary over any slightest provocation. I thought if we kidnapped him, we could get some money from him.”

“We treated our boss well after we kidnapped him. We fed him fried rice.

My brother, Michael, used to buy the food for him. I was the one who gave information on his movements. He was about to leave when the kidnappers came to the office and kidnapped him.

The kidnappers hadn’t even demanded ransom before police came.

“After our plans failed last year, I continued my job as a driver. The plan was that as soon as I resume work by 5am on that Sunday, they would use advantage of the open gate to come in and pick up my boss.

Our plan worked and we took him to a forest behind our house at Igando, Ibeju, Lekki. “I was arrested after Mr. Ken, who is a contractor with my company, called in the police and they arrested me as a suspect. It was during interrogation that I confessed to the police.”

Mr Kumming was kidnapped around 5am on Sunday. He regained freedom on Wednesday.