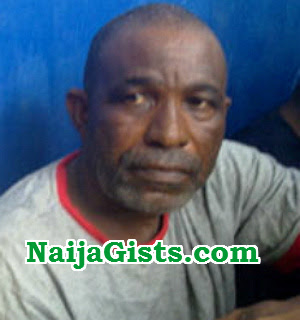 Edo State Police officials have nabbed a grandfather, the suspected leader of a notorious kidnap and robbery gang in Uromi city, Edo state.

The suspect identified as 53-year-old Fred Ikhimu Arobi who claimed to have 11 children and several grandchildren told police he used the ransom from kidnappings to send two of his children to the University.

Mr Fred said he joined the gang after a boy he met at a funeral service invited him, adding that he was paid N300,000 in his first operation .

He further disclosed that one of their victims, 67-year-old Premie Eboigbe Ohakhena, who he said was his neighbor, was killed and burnt to ashes at their hideout in the bush, because his (Fred’s) brother died after stepping into a land dispute between them.