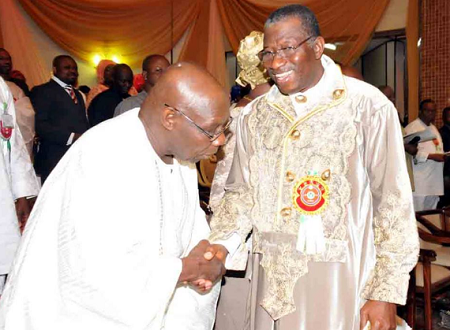 Obasanjo and many dignitaries were in Abuja yesterday for the wedding ceremony of President Jonathan’s adopted daughter, Ine Paul and her fiance Simeon.

After all the media war of words between Obasanjo and Jonathan, the two were spotted exchanging pleasantry yesterday where Obasanjo reportedly bowed to Jonathan.

The event that held at the National Christian Centre was also graced by Bishop David Oyedepo, Pastor Adeboye and many others.

The photo above is currently generating controversy online with many claiming Obasanjo is afraid of imprisonment… hahahaha  OBJ self his own too much.

Must he bow in this manner to greet Jonathan?