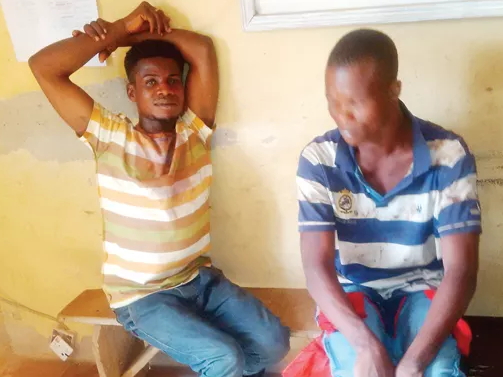 Pictured above is 21-year-old Chukwudi Iloh and his accomplice 25-year-old Obinna Abel.

The two were caught by police as they went about robbing unsuspecting bus passengers using a Mazda 323 which belonged to Chukwudi’s brother.

It happened that Chukwudi’s brother travelled to the eastern part of the country and left the car to a commercial driver.

However, when the driver could not meet up with the conditions, Chukwudi took the keys and handed it over to his friend, Obinna.

“He asked me to be driving it because he can’t drive.

So, we started taking it out but we were not making enough money to fuel it. So, on certain day, I don’t know what came over me and we decided to do one chance business with the car.

“We started in January and we have been making some money. On the day we were arrested, we had done two operations before we met one man who started making trouble with us,”.

A reliable police source told Inside Abuja that the two young men were spotted by a police patrol team on routine surveillance around Mabushi.

“Our men saw the car and noticed that its occupants were struggling with themselves. They gave them a close marking and when the victim saw that the Police Van was following them, he gained more confidence and was dragging the steering wheel with them. That was how they struggled and hit the concrete road divider and the police blocked them and arrested the boys”.

Continue Reading
You may also like...
Related Topics:abuja, arrest, one chance, robbers

Driver Who Applied Brakes To Avoid Killing A Motorcyclist Arrested By Policemen In Ketu Lagos
Health Talk: Going To Bed Late Can Make You Gain Weight & Develop Diabetes, Watch It!