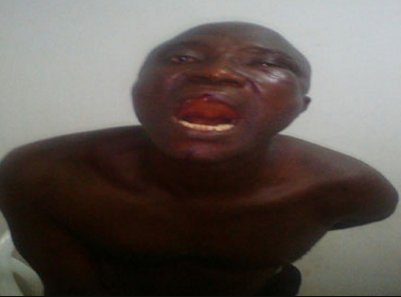 Jide Fowotade, a Contractor has accused the police of knocking out two of his teeth during an assault in Ketu, Lagos.

Fowotade, was said to have been beaten up by two policemen who accused him of attempting to knock them down with his vehicle.

The policemen allegedly removed two of his teeth before dragging him to their station.

The bike riding policemen were said to have accused him of attempting to run them over when he abruptly applied the brakes to avoid hitting a tricycle that veered off its lane.

One of them identified as Ayo was said to have head-butted the contractor, removing his front teeth.

A relative who refused to be named said:

“My uncle was returning home after picking up his wife from her shop when the incident happened. His wife was in the car with him. As he was driving, he noticed a tricyclist running towards him and immediately applied the brakes to avoid an accident.

“A motorcycle with two policemen was beside his vehicle but wasn’t affected. They came down to attack him that he wanted to injure them but my uncle explained to them that the tricycle was the reason why he had to apply the brakes abruptly.

“One of the policemen named Ayo knocked him with his head, which made two of his front teeth to fall off immediately. He was beaten up in the presence of his wife and was dragged inside the police station.

“He has been subjected to severe pain since the incident. I’ll like the police authority to investigate and get us justice.”