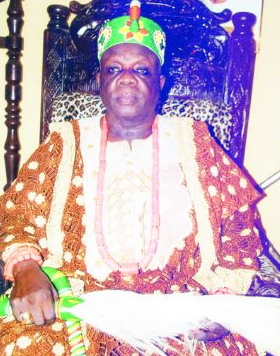 Over the weekend, some kidnappers invaded the palace of the Oniba of Ibaland in Lagos and abducted 73-year-old Oba Yushau Oseni. His wife, Nofisat, told our correspondent yesterday that the monarch was abducted about 8p.m. when he was preparing to take his bath.

It was learnt that about 15 masked gunmen stormed the town. Six of them entered the palace while others positioned themselves at strategic locations around the palace and on the waterways. It was also learnt that two yetto- be-identified persons were also kidnapped in Ojo Local Government axis before the monarch’s abduction on Saturday. Nofisat said the monarch was in his room when he heard the children making a loud noise in the living room. She said: “The monarch and I were both in his room when we heard the noise.

We came out to caution the children. But unfortunately, we met the gunmen who were already at the entrance of the living room. “They were shouting ‘where is the king?’ Immediately they saw both of us, they asked me if the person behind me was the monarch and he answered in the affirmative. Immediately, they left the children to abduct him.

“When I realised that they came for him, I tried to prevent his kidnap. But one of the gunmen hit me on the neck and I fell down. Before I could regain consciousness, they had whisked him away.They also went away with about five of our mobile phones.”

The monarch’s wife added that four of the gunmen took Oba Oseni through the backdoor, while the other two left through the main gate of the palace. She said: “The young wife went after the two abductors at the entrance, begging them to spare her husband.

It was in the process she was shot. The palace security guard, who was also preventing the kidnappers from taking the monarch away, was shot. He died on the spot.” The 60-year-old palace guard, Mr. Sunday Okanlawon, was shot in the chest.

The gunmen fled through the Iye-Egbe creek. Nofisat said they had not witnessed any abduction in the history of Iba town. “This is the first time. Even when vandalism was on the increase, there was nothing of such in this community,” she added.

A resident, who identified himself simply as Biodun, said that while the kidnappers were escaping with the monarch, they shot sporadically to scare the people who might want to halt their operation. He said: “In the process, bullets hit two residents, Hakeem Lalupon, a commercial bus driver, and a yet-to-be-identified commercial motorcyclist. The motorcyclist died on the spot. “Lalupon was shot in the stomach while refilling his vehicle with registration number AGL 658 XL, after the day’s work at his residence.

He was rushed to three private hospitals in the community but he was rejected. He was later referred to the Lagos State University Teaching Hospital (LASUTH), Ikeja where the doctors said he needs four pints of blood to survive.”

The son of the abducted monarch, Alhaji Kabiru Oseni, said he was coming from Oto-Ijanikin when he was informed by one of his siblings that their father had been kidnapped. He said: “The kidnapping of the monarch is embarrassing. Since his abduction, they have not called or demanded anything.

What is paramount to us at this moment is the release of my father.” About 1:30p.m. yesterday, Muslims and Christians in the community converged on the palace to pray for Oba Oseni’s quick release. The traditional worshippers also appeased their gods to ensure the safety of the monarch. Speaking after the prayer session, Evangelist Michael Toivide, head, Celestial Church of Christ (CCC), Iba Province, said: “the Oba is our father and since his abduction on Saturday, we are not happy and could not sleep.

This prompted us to embark on indefinite fasting until his release.” The state Police Public Relations Officer (PPRO), SP Dolapo Badmos, said the kidnappers were militants. She said: “They resorted to kidnapping because pipeline vandalism has been curtailed.

“We have been arresting kidnappers and this will not be different. The command is working with the Ogun Police Command to ensure that the issue of kidnapping is nipped in the bud in both states.”