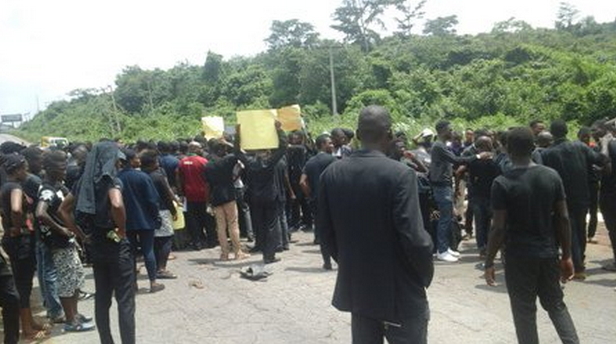 Several grieving Olabisi Onabanjo University (OOU) students seized the Sagamu – Ilisan stretch of the Lagos – Ore expressway as they stormed the scene of horrific accident which claimed the lives of a dozen of their colleagues last Friday.

Vehicular movement came to abrupt halt on both lanes of the dual carriage way – hordes of travelers were turned back even as they threatened to hauled stones at any truck carrying container.

The students who arrived in four long buses and about three cars had converged to pray at the scene for the repose of their colleagues but emotions took the better part of them as they cried, yelled and cursed the driver that brought the untimely death on the affected students.

Tens of Policemen, members of the Federal Road Safety Corps (FRSC) and operatives of the Ogun state’s traffic agency, TRACE, made frantic efforts to rein them in but with minimal success.

Seizing both arms of the expressway at the Ikenne -Ilisan stretch of it, they marched to the site of a factory beside the expressway few meters away from the accident, which they suspect to own the container that crushed students to death.

The company has since shut down momentarily but armed policemen stationed at the gate prevented them from advancing but following pressure from students, the steel gate gave way, and they surged into the factory in their thousands.

It would be recalled that over a dozen of students of the Olabisi Onabanjo University (OOU) Ago – Iwoye, were crushed to death and others gravely injured on Friday when a container fell on a passenger bus conveying them.

The 20-feet container from a moving truck came off when the driver was driving àgainst traffic and in a bid to avoid an obstruction at the Sagamu stretch of the Lagos/Benin expressway, the load tipped and dropped lethally atop of the bus’ roof.

The weighty container press – pinned the bus to the ground in the accident, which occurred few meters away from the gate of a plastic manufacturing company situating near the Ilisha Remo junction.
The vehicle was a truck marked (LAGOS) BDG 779 XE and a Toyota Haiace passenger bus bearing (Lagos) XV 311 MUS.
It was learnt that the OOU students were travelling to Lagos state for the weekend when they met their untimely death.