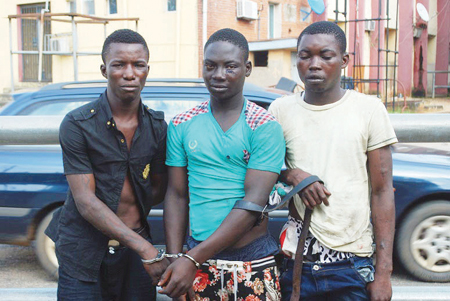 The 3 notorious traffic robbers were caught around 7am this morning after their victim, Olasunkanmi Oyelakin notified the police.

The victim said his blackberry phone was stolen by the suspects during early morning traffic rush around Bolade in Oshodi.

“I was on my way to Ajah at 6:30am, I saw Adekunle passed by the bus I boarded. Unknown to me, he was monitoring me. A few minutes later, I noticed a missed call on my phone, and as I brought out the phone, he took the phone from me through the window and ran away. Because there was traffic, I made no attempt to struggle with him, but got down from the nearest bus-stop and I began to monitor him. I noticed that he had regrouped with his friends and one of them was telling him to hand over the phone he stole from me. “I knew I couldn’t handle the three of them all alone, so I informed the RRS operatives who followed me to the place where he was arrested.”

One of the suspects, Mustapha Adekunle said frustration drove him into robbery.

“I am a bus conductor in Oshodi. I am from Ibadan and a secondary school dropout. I sleep in Ojuwoye, Mushin. I am an ex–convict. I don’t want to go to prison again. Government should please have mercy on me. I was frustrated into traffic robbery. I won’t do it again,” he pleaded.