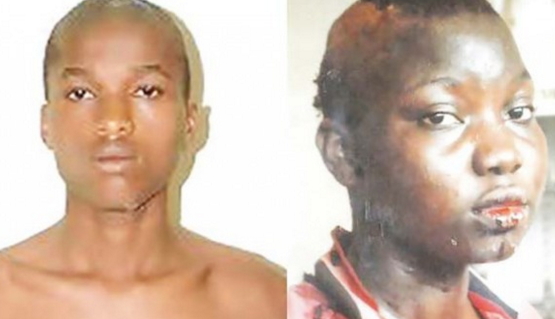 A 15-year-old boy identified as Silas Anidi has been arrested for allegedly beheading an 11-year-old girl identified as Aghogho Igbi for ritual purposes. He was also alleged to have attempted to kill her sister, Favour, 13, when he was caught by neighbours.

Silas, who is the only son of the General Overseer of God Pecu­liar Evangelical Ministry, Sapele, Delta State and a family friend to the Igbi’s family, had during a visit, smartly beheaded little Ag­hogho and was about to do same to the deceased’s sister, Favour, when neighbours intervened and got him arrested.

According to the police, Silas, 15, is currently in custody while his accomplice, simply identified as Christian is still at large.

Giving horrific details on how he carried out the act, Silas claimed that he was lured to commit the crime by his friend, Christian.

“It was his brother who is in Ghana that gave us the contract. He prom­ised to pay us N50,000 and also help us to relocate to Ghana. I started monitoring the Igbi’s fam­ily because I know that they used to leave their children at home and go out. Luckily on November 28, 2015, I visited their house and as God will have it, their elder sister, Janet said that she wanted to go to school for evening lesson. I was excited that I was left alone with the much younger ones.

“I sat down on the rug and was watching cartoon network with Aghogho. While she was busy en­joying herself, I dragged her head back and sliced her throat.
“I rushed to the next room where Favour was sleeping and tried to do the same but she woke up and started struggling with me. I tried to slice her throat but she started screaming. I only managed to stab her in the head but her screams were too much that neighbours were attracted. I was about to es­cape when neighbours caught me”, Silas confessed.

Begging for mercy, Silas claimed that he cannot explain what led him into such a horrible act.

“I am the son of the General Overseer of God Peculiar Evangel­ical Ministry, Sapele, Delta State. I am ashame of myself because my family especially my dad will be disappointed in me. I was not satis­fied with the little money that we made in the church that is why I wanted to travel to Ghana to make money. I was deceived that until we get human head that we will not succeed. He promised to pay N50,000 for each human head”, he added.

When we visited the Igbi residence at 3, Odudura Street off Okpe Road, Sapele, friends and well-wishers were seen consoling the family over the death of their daughter, Aghogho and thanking God for sparing the life of Favour.

Still recovering from the wound that she sustained during the inci­dent, Favour, 13, said that she does not understand why Silas who was their family friend will suddenly attack them.

“We attended church vigil the previous night and I was in the room sleeping. I heard when someone was at the door, but since my sisters were around I assumed that they will attend to the visitor. I heard when my elder sister, Janet left the house and told Silas to re­lax since he is a close friend of the family.

“In less than 10 minutes, I no­ticed that someone was trying to suffocate me with the pillow. I was shocked that it was Silas but since it was no longer a joke, I struggled to free myself from his grip. I kept screaming and he used a knife to stab me in the head. I was lucky that someone heard my voice and rushed to the room. He was later arrested while he was trying to es­cape through the roof.“I rushed out to the palour and saw that he had beheaded my sister. I don’t know the kind of devil that entered into him that he had to kill my sister,” she said crying.

One of the sympathizers while trying to console Favour claimed that he was the one who rushed into the house as soon as he heard Fa­vour shouting for help.

“I was the one who dragged him down from the roof. I am still in shock because I cannot believe that Silas did this. He comes around to play with us whenever he wants. We see him as a brother. I am shocked but I wish that justice will be served,” he said.

Confirming the incident, the state Commissioner of Police, Usman Baba Alkali said that in­vestigation was ongoing while detectives are still on the trail of his accomplice, Christian and his brother who is based in Ghana. He advised members of the public to me wary of the kind of friends they allow into their homes.