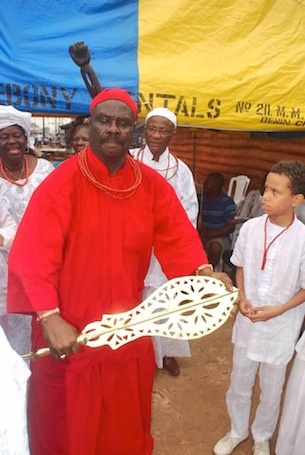 A Senior Magistrate’s Court in Benin, Edo state on Wednesday ordered the remand of Prince Rich Arisco-Osemwingie, in prison custody, for unlawfully coronating himself as His Royal Majesty, Ogiamen of Utantan in Benin nation.

Arisco-Osemwingie, a Chieftain of the Peoples Democratic Party (PDP), was arraigned along with his brother, Patrick Osabuohien, on a six-count charge of felony and misdemeanour before Chief
Magistrate M.C. Ojobo, (Mrs.), in Charge No. MOR/148c/2015.

The accused persons were alleged to have conspired together on the 9th day of September 2015 at No. 97 Sakponba Road in Benin City to commit the unlawful coronation, an offence punishable under Section 517 of the criminal code, Cap 48 Vol 11 laws of the defunct Bendel State of Nigeria 1976 now applicable in Edo State.

According to the charge sheet, the 1st accused person (Rich Arisco Osemwengie) was said to have allowed himself to be installed as a Traditional Ruler, His Royal Majesty, The Ogiamen of Utantan Benin Nation, as well as assumed the Chieftaincy title when he is not a chief, without the approval of the Executive Council of Edo State, an offence punishable under Section 20(2)(b) and 26 (1)(a)(11) of the Traditional Ruler Chiefs Law of Bendel State.

The 2nd accused person (Patrick Osabuohien) and others now at large, were alleged to have carried out the said coronation without the approval of the Executive Council and thereby committed an offence punishable under Sections 20 (2)(a)(b), 26(2)(a) and 249 (d) of the criminal code.

The accused persons pleaded not guilty when the charges were read to them.

Citing Section 118 of the Criminal Procedure, as well as Section 36(5) of the Nigeria Constitution where bail was at the discretion of the court, Counsel for the accused, Godwin Oiakhena who led four other lawyers, prayed the court to grant his clients bail, saying that as gentlemen they would not jump bail.

The Prosecution Counsel while objecting the bail application, described the 1st accused person as a man of considerable means who has the capacity to interfere in the investigation of the trial as others were still at large.

Edo State Attorney General and Commissioner for Justice, Henry Idahagbon, who led a retinue of Senior Counsel of the Justice Ministry in prosecution, told the court that the offence was tantamount to a traditional coup de tat capable of causing breach of peace, unrest and civil disorder in the society.

He therefore urged the court to refuse the bail application.

In her ruling, Magistrate Ojobo ordered the accused persons to be remanded in prison custody and adjourned hearing of case to 29 September, 2015,

2 thoughts on “Photo: PDP Chief Who Crowned Himself King In Benin, Ogiamen Of Utantan Dethroned & Jailed”