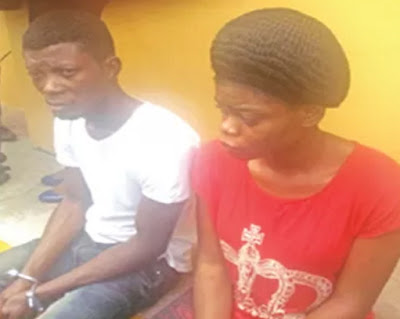 September 27, 2016 – Picture: Police Arrest Nigerian Who Kidnapped Self To Get Money From Parents

Grace Igwe, a 22-year-old lady who lives with her parents at 19, Agulu Street, Umuahia, Abia State, has reportedly organised her own abduction with her boyfriend, Sunday Bright. Igwe and Bright were yesterday paraded by the state Commissioner of Police, Mr. Leye Oyebade. Bright, according to Oyebade, is from Esan North, Edo State.

He was arrested in connection with the abduction of the lady after she was reported missing by her father, Obinna Igwe, on August 9. “Search for the whereabouts of the missing Grace Igwe by the police and the family of the victim yielded positive result when an unknown caller demanded N100,000 ransom, which was paid in parts into the bank account of the suspect.

“This link was followed by the police in their investigation until the suspect was arrested on September 9 at Akpakpava area in Benin City, Edo State and the suspect led the police on the rescue of the victim,” Oyebade said. Narrating his own side of the story, Bright said his girlfriend, Grace, came to him demanding N200,000 and when he said he did not have the money she pressed for whatever he could afford.

He explained that because of the pressure and the urgency of the demand he suspected she had fallen into the hands of fraudsters who wanted her to bring the money.

Bright said he asked her whether the parents were aware of the development and she said no. From that time he started making contacts with her parents to raise the money demanded by the fraudsters who Grace alleged took her phone and other valuables until she returned with the ransom.

The suspect added that when it became obvious that she was a victim of fraudsters, he decided to help her raise the money by making calls and text messages to her parents and in the process he was arrested by the police. He said Grace stayed with him for three weeks while trying to raise the money.