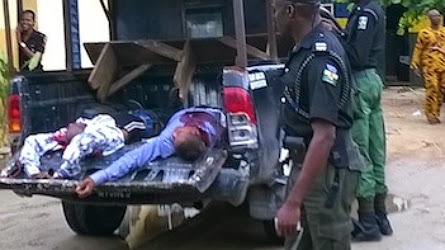 On Wednesday the 5th of November 2014, nemesis caught up with two suspected armed robbers trying to rob customers at a bank on Ikwerre road in Port Harcourt, River State.

According to Rivers State Police spokesman, the robbers were shot dead while attempting to carry out a robbery operation at the Eco bank located at Agip Junction along Ikwerre road in Port Harcourt yesterday.

According to witnesses, the motorist that brought the robbers to the bank managed to escape when the dare devils came under gunfire from the policemen who lay siege for them after an intelligence report.

However another eyewitness said she couldn’t confirm if the men killed were armed robbers.

“all I heard was gunshots. The driver of the red car and the persons killed ran towards the school (Government Girls School,Rumueme) and escaped,one them was shot dead instantly while another one who tried to escape was also shot dead.” – a female customer at Ecobank told journalists.

Another witness said one of the robbers who got killed was a banker at Ecobank.