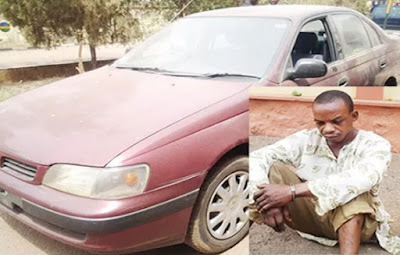 Pictured above is Oludayo Adekunle, the son of a retired army officer based in Sagamu Ogun State.

In January, he broke into the Sagamu home of one Saka and stole his car.

Adekunle whose father is a retired army officer was caught after he approached a prospective buyer in Ondo State.

The buyer asked to know if Adekunle is the owner of the car and asked for the particulars.

He saw the phone number of the owner and called to inquire about it.

When he called the number, a man picked and confirmed that he was the owner of the vehicle. This owner is Saka. The buyer said, ‘your vehicle is in Ondo State now.’ He told Saka that somebody wanted to sell it. He asked Saka if he gave his permission to such a person to sell his car? Saka said no.

“Saka now collected the phone number of Adekunle from the buyer.

When Saka dialed the number, he discovered that it was his co-landlord within the street.