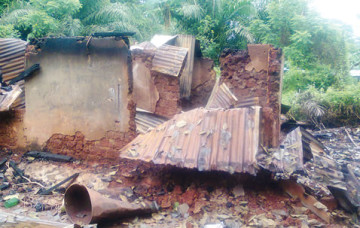 The Igbotako Division of Ondo Police Command have uncovered a hideout used by ritual killers in Agbo Oyinbo village, Okitipupa.

According to residents, ritual killers had been using the hideout for the past three years. Police investigations revealed that the suspects, after kidnapping their victims, would bring them to the location and slaughter them.

Sequel to the discovery of the illegal activities of the suspects, the youths of the community were said to have reported to the police who reportedly stormed the village and arrested about five people in connection with the crime. The youths also reportedly demolished the building.

Sighted at the hideout were: cow horns, clothes reportedly belonging to some of the victims, palm fronds, bottles of gin, calabashes, ‘Ghana must go’ bags among others .

Confirming the development, the Baale of the Ago Oyinbo, Chief Moyebi Okeowo, explained that the ritual killers started using the building in 2012 when the suspects came to him to beg for a space in the village which they wanted to use for a location to shoot a movie.

He said he asked somebody to take them to the owner of the land, unknown to him that the suspects had an ulterior motive.

“I learnt they were authorised by the wife of the landlord to use the land and since then they have been using the land. I told their leader to go and report their activities to the police and he later informed me that he had done so.”

The old man stated further that he was unaware of the activities of the suspects until last Monday when he got the information that the suspects were using human beings for sacrifice on the land.

[Reported By Ade Akanbi, Metro Plus]