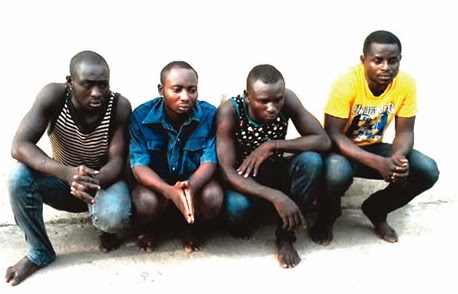 4 suspects are currently in Lagos police custody following a robbery attack at the popular Alaba International Market in Ojo area of Lagos.

The gang led by one Friday used locally made guns to carry out their operations.

Read what one of the suspect, 35-year-old Onyenge Osanie told police:

“We usually work with phone dealers in the market who specialise in selling stolen phones. When we steal, they sell, and they then settle us. But later on, some of them defaulted, and we attacked their shops. It was not as if we robbed them, we only came to ask for our money.

“On that day, we had taken only 10 phones before the police apprehended us. I had initially escaped, but two gang members who were caught at the scene later brought the police to arrest me.”

Osanie, a married father of 3 begged Police to release him and promised never to rob again.

Another suspect, Azuka Eboh, 27 said he joined the gang because of hardship. While the fourth suspect, Michael Ezelonwu said he was a truck driver before meeting the gang.

“I was working as a truck driver before I met them. I had gone out with the gang on three occasions to rob in the market. We only took advantage of the commotion of the market to rob them. It was not deliberate,” Michael said.