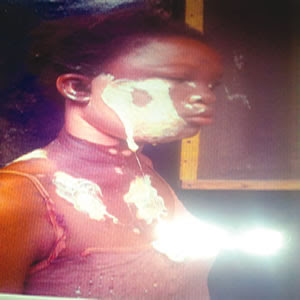 A teenager, seamstress apprentice has been arrested for attacking her colleague.

The suspect identified as 16-year-old Cecilia Ukpa reportedly pour hot water on her colleague over a disagreement.

The victim, Abigael Albert and the suspect live in the their boss’s residence on Meyiga Street, Ilogbo in Ajangbadi area of Lagos

A day after the pair had a disagreement, Abigael was cooking in the kitchen when Cecilia pour hot water on her.

She has been arrested and charged before an Apapa Magistrate Court.

The charge read, “That you, Cecilia Ukpa, on June 24, 2015, at about 6pm, on Meyiga Street, Ilogbo, Ajagbandi, Lagos, in the Apapa Magisterial District, did unlawfully assault one Abigael Albert, 17, by pouring hot water on her body, which caused her grievous harm and thereby committed an offence punishable under Section 243 of the Criminal Law of Lagos State of Nigeria, 2011.”

The case will come up for further hearing on the 22nd of July 2015.