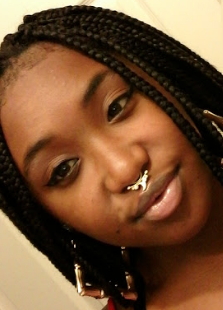 A teenage mother has been arrested in Denver Colorado after killing her newborn baby daughter hours after giving birth to her in their home.

The suspect, 16-year-old Alaya Dotson allegedly shoved a rock in her baby girl’s throat after giving birth to her in the bathroom in September 2017.

Her mother who was not aware that the teenager had given birth only got to know when she saw blood on her shirt and on the blood the blanket the newborn was wrapped with.

She immediately called the police when Dotson told her the baby girl was already dead.

The newborn was rushed to the hospital where doctors removed an inch rock from her throat but she died hours later.

Dotson will be tried for murder as an adult after she allegedly confessed to police that she suffocated the newborn because she’s not ready to become a mother.

Grandpa Who Kidnapped 15-Year-Old Boy & Used Him As Sex Slave For A Year Arrested In Minna
IPOB Threatens To Kill Buhari If He Visits Anambra State, Warns Him To Stay Away From Biafraland