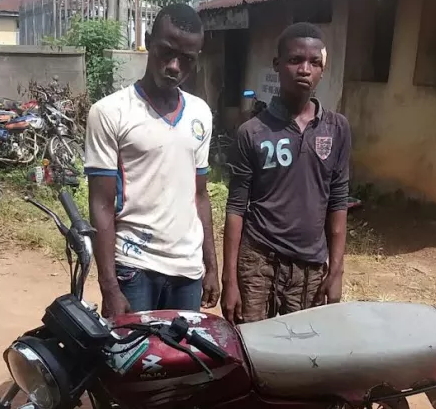 2 suspected armed robbers who specialise in snatching motorcycles at gunpoint have been arrested.

The suspects, Lambo Wasiu and Ojelade Moses were caught this past Saturday on Ofada Mowe Road in Ogun state .

According to police investigation, the suspects who recently regained freedom from a prison in Ogun state had stopped one Sunday David, a motorcyclist and pretended to be real passengers.

On getting to a remote area, they sprayed pepper on the motorcyclist and snatched his motorcycle.

The scream of the victim reportedly caught the attention of police men patrolling the area.

They arrested one of the suspects, Ojelade Moses who in turn helped in the arrest of his accomplice, Lambo Wasiu.

Police also revealed that the ex-convicts robbed and killed one Chukwuma Oroke on the 6th of October in Ofada area of Mowe.

They have been transferred to the Federal Special Anti- Robbery Squad (FSARS) for discrete investigation.