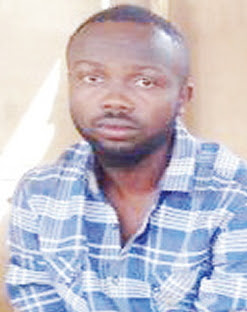 A 500 level student of Social Works Department at an Enugu-based university, Ugwuanyi Ezinwanne aka Floky, has told the police he regretted his decision to join a cult group. Ezinwanne was arrested by the police in Enugu State for various criminal activities, ranging from cultism to armed robbery. The suspect hails from Ama- Eziani in Achara Community Nsukka Local Government Area of the state.

The state Police Public Relations Officer (PPRO), DSP Ebere Amaraizu, said in a statement the suspect resided at No 13, Uzumozu Street, Nsukka. According to the statement, Ezinwanne is now regretting his involvement in cult activities and armed robbery currently being investigated by the operatives of the Special Anti-Robbery Squad (SARS) in Enugu State.

It was gathered that the suspect and two other students, now at large, had stormed one unidentified house of their victim at Nsukka, where they stole one plasma television, one play station and N3,000.

The statement added that following a report of the incident, the operatives of SARS moved swiftly and arrested the suspect. The PPRO said that during a search in the house and premises of suspect, the police recovered the stolen items. He said:

“The suspect is now regretting his action and said he never knew that it will result to his being in the net. “He blamed the situation on his inability to give up his membership of cult group, as he claimed that he used to be the capon of the Vikings Confraternity.” Amaraizu said the police were still investigating the case.