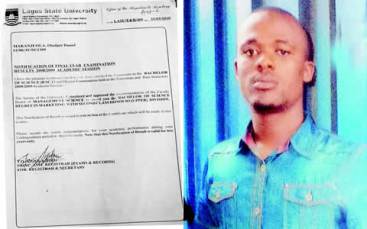 The police said Makanjuola had paraded himself as a degree holder in marketing with Second Class, Upper Division, before his arrest.

He was also said to have tendered a forged National Youth Service Corps discharge certificate and a reference letter to the bank. He claimed to have obtained the letter from United Bank for Africa, his purported former workplace.

Metro learnt that the suspect, who hails from Ijero Local Government Area in Ekiti State, had joined the bank in 2013, before he was sacked in July 2015 after the documents were confirmed to be fake.

It was gathered that the fraudulent act was discovered after the management sent a letter to the UBA to verify the genuineness of the reference letter. The UBA was said to have denied knowledge of Makanjuola and the letter.