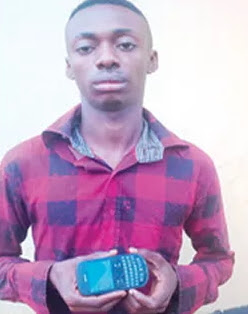 IGP Monitoring Team and their counterparts in the Intelligence Response Team (IRT), have arrested a man for blackmailing one of the wives of the late Chief MKO Abiola and a senator. The suspect, Caleb Nzube (26), allegedly blackmailed Mrs. Timu Alade Abiola, demanding $5,000, equivalent of about N1.5 million. Nzube was arrested two weeks ago in Anambra State after the IG’s team stormed his hideout in Obosi area.

The police said: “Nzube hacked into the twitter handle of Mrs. Timu Alade Abiola,downloaded her pictures and designed a web page, depicting the woman carrying a human skull in preparation for rituals. He later contacted the woman and threatened to expose the web page to the whole world if she didn’t pay $5,000.” Nzube said: “I started following Mrs. Timu Alade Abiola on Twitter. I got her pictures. I felt she was a good catch and I decided to blackmail her.

I used ‘photoshop’ to make her look like she was carrying a human skull. I designed a web page with a little gossip story on it that she was caught for ritual. I sent her the link and when she saw it I demanded she pay me $5,000 or I would show it to the whole world.

“One of her friends came in and begged that I shouldn’t do it, that they were ready to pay me $2,000. I rejected the money. I insisted that I must collect the amount I demanded.” Later they discovered I was Igbo and gave my number to an Igbo girl who started talking to me.

I accepted their offer. What got me angry was that while we were still talking, they sent a fishing link that destroyed my website which I had been maintaining for more than four years. That website paid me the little money I used in sustaining myself.”

“I told the Igbo girl about it and told her that if I don’t get the money before the end of the week I will show the web page to the whole world. She asked for my account, I gave it to her but before I knew what was happening, the police came and arrested me.”

The suspect’s waterloo started after the woman wrote a petition to the IG, Solomon Arase. Arase quickly drafted his team to track down Nzube and arrest him. According to the police, Mrs. Abiola wasn’t Nzube’s only victim. He was also blackmailing a senator and two other important personnel.

Speaking after his arrest, Nzube said:

“I specialised in online dating, but I later ventured into blackmail. I felt it was more lucrative. I normally spend hours on the social media, searching for prominent Nigerians. My targets are mainly rich politicians, popular businessmen and socialites.

I go after these people because I believe they are more sensitive to what is being said about them in public.” Nzube, who felt Mrs. Abiola shouldn’t alert the police, said:“I don’t understand why she had to bring in the police.

I told the Igbo girl that what I needed was for her to tell her madam to just pay me for my website they destroyed.

In fact, I regret all this. If I had known it would be this messy, I would not have ventured into this. What I do is only dating. I just wanted to try my luck.”