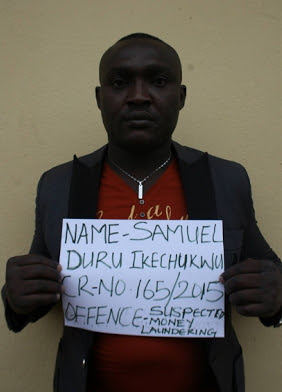 The Enugu Federal High today sentenced one Samuel Duru to six months imprisonment for failing to declare 96,000 dollars at the airport.

It also ordered the forfeiture of the undeclared amount to the Economic and Financial Crimes Commission (EFCC).

The counsel to the anti-graft agency, Mr Michael Oni, told court that Duru was arrested in December 2015 at the Akanu Ibiam International Airport, Enugu as he was to board a flight to China.

Oni said that the accused had declared to the airport officials that he had only 10,000 dollars with him but upon a search, 96,000 dollars was found on him which prompted them to invite the EFCC.

He said that the accused person was later charged to court for money laundering and false declaration of his cash.

Duru pleaded guilty to both charges.

The defence counsel, Mr Ikuka Kennedy, appealed to the court to tamper justice with mercy as his client had pleaded guilty to the offences.

“My client is a businessman at Ariariah International Market, Aba and his business is registered with the Corporate Affairs Commission.

“He is a genuine businessman as well as a first-time offender,” he said.

Ruling on the matter, Justice M.N. Yunusa said that under the Criminal Administration of Justice Act, he was not under compulsion to make use of the plea bargain option as the evidence produced by the prosecution counsel was sufficient to convict the accused.

He sentenced the accused to six months imprisonment running from the day of his arrest and to the forfeiture of the balance he failed to declare to the EFCC.