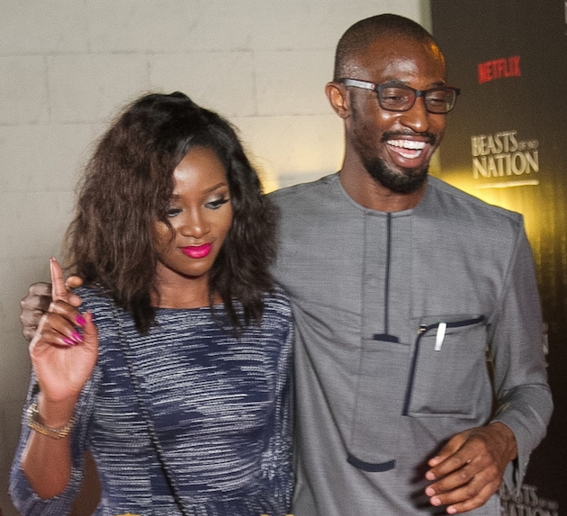 Nollywood heartthrob, Genevieve Nnaji attended the Lagos premiere of the Netflix produced movie entitled ‘Beasts of No Nation’ last Saturday, but that didn’t inch close to being newsy until a wrong stunt was pulled. Uzodinma Iweala, son of Dr. Ngozi Okonjo-Iweala, who wrote the book Beasts of No Nation from which the movie was adapted, went flat on his knees to propose to Genevieve who was resplendent in a knee-length ankara dress.

Getting up to that kind of trick on the red carpet…? That was a joke maybe taking a wee bit too far. It’s difficult to trifle with perhaps the most coveted thing in one’s life. One of the best things to hit Nigerian showbiz industry is what this cerebral author just toyed with, but if the recipient of the proposal had not complained, why should the rest of us? 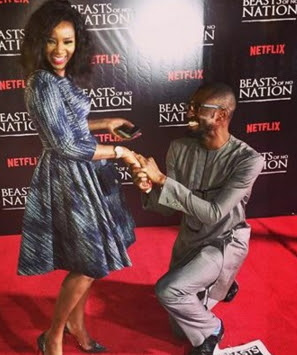 When the photograph made its way into the Internet, many were fooled by the photo as it looked too real to be a stunt. Until the author shared the picture on Instagram and captioned it “She didn’t say yes, but she didn’t say no either. Thank you to @genevievennaji for supporting #beastsofnonation. Your presence means so much.”

Sometime in October, Genevieve Nnaji, 36, said she was not bothered about her single status in an interview with Encomium Weekly, “Obviously companionship is great, but the fact that I am working and I am busy keeps my mind busy. If you are busy, you will not bother about things that are not there. I will rather appreciate the ones that are there.