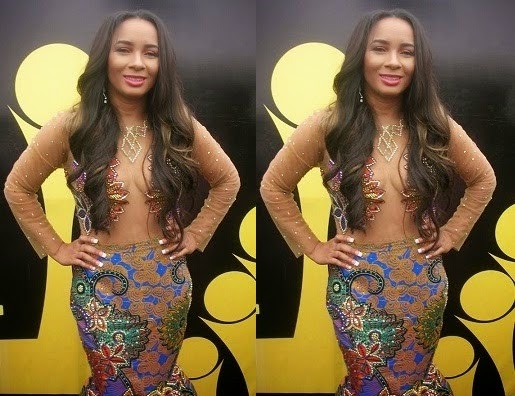 The President of Actors Guilds of Nigeria, AGN Ibinabo almost caused commotion over the weekend when she entered the venue of City People Entertainment Award in an open front dress without bra.

The mother of five beautiful children wore a sheer net dress that exposed her cleavage to the award ceremony that held at 10 Degrees event center in Ikeja Lagos last Sunday.

Miss Ibinabo has been a subject of controversy with her choice of dress since last year.

Her marriage to Fred Amata ended over infidelity few years ago and since then, she hasn’t remarry.

See more photos of Ibinabo Fiberesima at the event below:

Is Ibinabo trying to pull Kim K stunt on us??? and why is she covering her b**bs with her hair??

If Nollywood’s President can dress like this, what do you expect her followers to do?

Continue Reading
You may also like...
Related Topics:dress, fiberesima, ibinabo, transparent, without bra