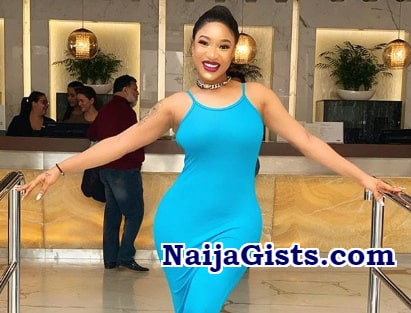 A Mega star in a cheap dress; this describes Nollywood actress Tonto Dikeh who has revealed that a blue dress which she sported in an Instagram post cost her just N1, 500.

This is contrary to the belief that stars usually wear expensive designs and labels.

The mother of one also said a couple of years ago that, she wouldn’t have considered the dress because it was cheap, aligning to the snobbish attitude towards cheap clothes which many movie stars have.

“4/5 years ago I would never have blinked at a dress that cost nothing because I had the mentality that if it was cheap it wasn’t for me,” she said on her Instagram account, posting a picture of herself in the light blue dress.

“I mean who the heavens did I think I was? No wonder I got broke quick all the time?? No wonder I had no plan and could execute no plan cos of my reckless spending.

“BOTTOMLINE I BOUGHT THIS DRESS FOR 1,500naria and was given 44naria change!!

#THERE ARE CERTAIN THINGS THAT ONLY MATURITY AND EXPERIENCE CAN TEACH YOU!”

She also gave her fans a clue to where the dress could be bought. According to her, “they are hung just inside the same mall where you have @style_temptation by the entrance!”