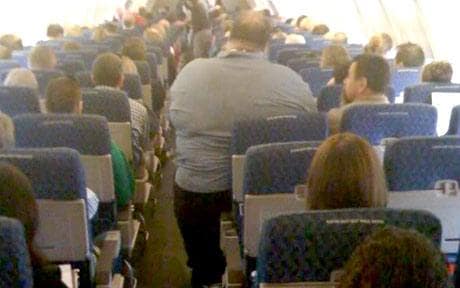 An Italian man has sued Emirates Airline for suffering because an Obese passenger was placed besides him on a 9-hour flight from Cape Town South Africa To Dubai.

Mr Giorgio Destro who works as a lawyer claimed that his trip was ruined because the overweight passenger spilled into his seat on the Boeing 777 aircraft.

He took the above selfie that shows him looking sad and apparently cramped in the economy sit next to the unidentified overweight passenger who reportedly coughed throughout the flight. The lawyer demanded for seat change but was told the flight is overbooked.

He said Emirates is yet to apologise for the hardship he was subjected to.

The airline sought to strike out the matter in court but was blocked on Human Right ground.

The case hearing is scheduled for hearing on the 20th of October in Padua, Italy.

What will you do if you were in his shoes???

13 thoughts on “Photos: Man Sues Emirates Airline For Seating Him Besides Obese Passenger On 9-Hour Flight To Dubai”