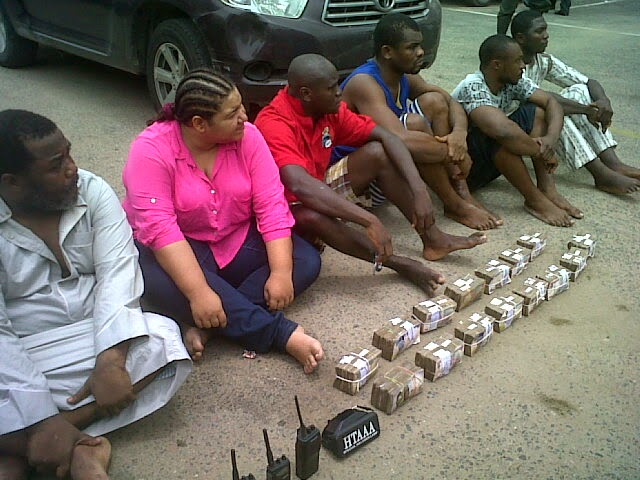 A middle age Lebanese-Nigerian woman identified as Amira Abdallahi has been arrested for impersonating an EFCC official and for robbery.

The 32-year-old woman was arrested with 5 other robbers by police few weeks ago.

Our correspondent learnt that Eze, who is said to be the gang leader, was arrested by men of the Special Anti-Robbery Squad of the state command on February 27 in the VGC, Ajah area of Lagos.

Eze’s confessions, it was gathered, led to the arrest of the Lebanese woman and other gang members. 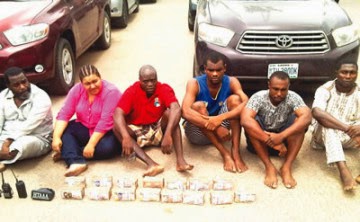 Items said to have been recovered from the gang included six Toyota vehicles, one single-barrelled pistol with four cartridges and a Bryco pistol with six rounds of 5.56mm ammunition.

During a parade on Wednesday, Abdallahi, whose father is a Lebanese and mother from Ishan, Edo State, said she joined the gang in 2014, and had done six deals with them where she realised about N10m.

She said, “I was born in Nigeria and I grew up in Lagos. I stay in Lekki area with my family. I am married with five daughters. The first money I got from the deals was $5,000. I could not stop because the money was tempting.

“I was formerly doing interior decorations work. That was how I met Eze, who is nicknamed Senator. I did some interior design jobs for him in a hotel he owned. That was around March 2014.

“I had done about six deals with the gang. My role is just to talk on phone with our would-be victims. They think I am a foreigner, and they are willing to trust us. I have made about N10m so far, but all the accounts have been drained now. I handed everything over to the police.”

Eze, the gang leader, from Nkanu, Enugu State, said, “Before we rob our victims, we usually tell them that we want to purchase dollars, but we know most of them do not have an operating licence. So, we will pretend to be officials of the EFCC, and we will harass them for not having a licence. Later, we will ask them to pay a fine.

“They will bring the money to us in convenient places like hotels and banks. I was formerly a businessman. I also run a hotel. It is about five years now that we started this project. I was arrested by the police four years ago for a similar issue, but I was granted bail by the court.

“The police walkie-talkie and other gadgets recovered from me were obtained during the Anambra elections. I was not into politics, but I was part of that election.”

The gang leader Eze has a big hotel in Edo State while other members of the gang have mansions in Lagos, Ogun and Delta states

More in Cartoon of the day