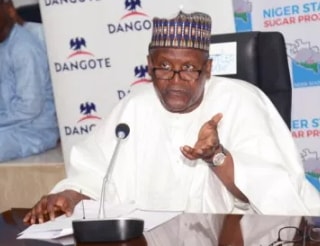 The Business Mogul was accompanied by his daughter Halima and her husband Alhaji Suleiman Bello. He was in the state capital to attend the launching and disbursement of Aliko Dangote Foundation N250 million micro grant to 25,000 Muslim women who are vulnerable in Minna.

Continue Reading
You may also like...
Related Topics:$250million, dangote, minna

More in Cartoon of the day

Update: Soldiers Break Into Port Harcourt Police Station, Free Suspects As They Beat Up Policemen & Civilians
Okada Thief Arrested In Shasha Lagos Confesses “I Became A Robber Because I Needed Money To Buy A New Motorcycle”