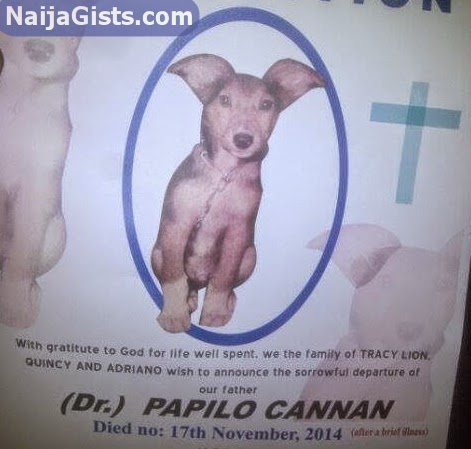 From the obituary notice, it was obvious that something atypical was about to happen. Posted in many places around Ikeja, it left many with mouths agape in utter bewilderment.

The obituary read: Transition: With gratitude to God for a life well spent, we the family of Tracy, Lion. Quincy and Adriano wish to announce the sorrowful departure of our father, Dr. Papilo Cannan that died on November 17, 2014, after a brief illness. Aged 15, may his gentle soul rest in peace.”

Well, nothing really strange in the obituary. Except that the deceased was – wait for it – a dog!

Last Saturday, November 29, Oshifila Street, Computer Village, Ikeja, Lagos State, was agog, as a dead dog, a male Alsatian, popularly known as Dr. Papilo in its lifetime, was given a befitting burial by its owner.

A day before the burial, a service of songs was held for the dog at Cannan Hotel, Ikeja.

At the burial, there was plenty to eat and drink, just as guests were thoroughly entertained by the Nigerian Army Band. A detachment of mobile policemen at the event also gave the deceased dog a seven-gun salute.

Many sympathisers and guests showered accolades on the dog, paying glowing tributes to the animal in the condolence register.

Dog-owners, military personnel, police officers, veterinary doctors and many others thronged the venue of the ceremony, which commenced at 11am that Saturday. Many passers-by abandoned their initial plans and made a detour to Oshifila Street to witness the unbelievable funeral.

The street and many parts of Ikeja, the capital of Lagos, came to a standstill for some hours. Many could not believe that it was a dog that was being buried. But the owner insisted that Papilo was more than a dog, describing the canine, as a special breed.

Immediately after its death, a condolence register was opened for the dog in front of Cannan Hotel, where Papilo has served, as a security guard for 10 years.

Some of the tributes in the condolence register read: Papilo, you were great, You will remain forever in our memory, We miss you Papilo, Sleep well, What a brave dog!

The owner of the dog, Prince Ani, who serves with the Nigerian Army in Ikeja, told the reporter that his affection for his late dog was unconditional. 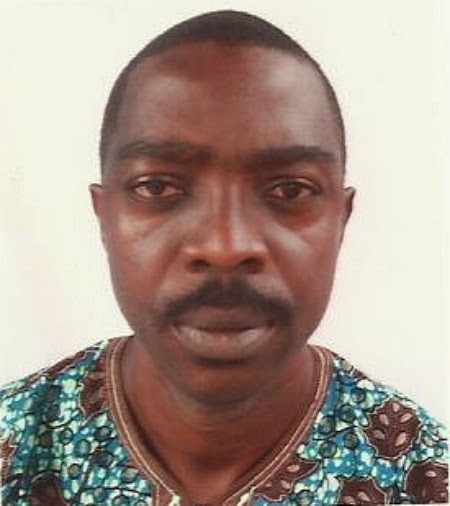 Papilo’s remains were interred in a four-feet grave and decorated with roses. The grave is beside the hotel where the dog served till its demise.

Ani described the dog, as his business partner, first child and a friend that travelled with him across the country. He said the dog was an intelligent soldier and a security expert that fought a good fight before its departure. He said he could not reward the dog enough for all it did for him in securing his business and protecting his family for years.

The man, who has four daughters from his late wife, recalled that the dog was their only partner when he newly got married 15 years ago. In all the years that Papilo lived, he said there were only few important ceremonies that the dog did not attend with him.

According to him, the little way he could reciprocate Papilo’s unquestionable love for him and his family as well as the dog’s bravery, especially regarding his business and environment was to give the animal a befitting burial. He said he could not quantify the money he spent on Papilo, which he bought at three months, before the dog’s death at the ripe age of 15.

“My wife and I stayed together for some time without a child. Suddenly, people started calling us Papa and Mama Papilo. The dog travelled with me to Jos and Maiduguri. While in Maiduguri, it was trained and used to hunt bombers. It was a unique dog. In the real sense, it was my first child. When I lost Papilo, I felt sad the same way I felt when I lost my wife. The dog was just too close to me,” he informed.

Ani, who is also the Chief Executive Officer of Cannan Hotel, was neatly dressed in a black suit for the occasion. He commended all the guests for attending the burial and for commiserating with him on the demise of his much-loved dog.

The chief mourner, a graduate of Accounting from Ahmadu Bello University, Zaria, said he was happy that his pet died peacefully, after a brief illness. He prayed to die the same way his dog died, pointing out that Papilo’s death was not tragic.

Manager of the hotel, Onyeka Obi, who was around when Papilo breathed its last, told the reporter that the dog was sick and did not eat for about two weeks. Papilo’s veterinary doctor administered drugs to the dying dog but all treatment offered proved abortive.

Also praising the dog’s security consciousness, its owner said: “Papilo confronted armed robbers sometime ago and gave one of them a serious injury. The robber could not run further, and was later caught by the police. Everybody knew Papilo in this area. I am missing the dog, and the other six dogs at the hotel are also missing Papilo because it was like their father. Here, we treat dogs like human beings. We give them the best food you could think of.”

Chairman of the occasion and a priest with the Brotherhood of the Cross and Star Parkson Edjeketa described the dog’s burial as a celebration of “our brother, Papilo.” He said the event was in line with God’s will for humans to show love and care to animals that He, God, had placed in human custody. He praised Ani’s uncommon love for his departed dog.

The Coordinator, Nigerian Dog Association, Ndubisi Faisal Amuka submitted that the name, dog, was not an accident but a deliberate divine arrangement to show the animal’s relevance to mankind. He explained that God watches over the front, while the dog watches from behind. He saluted Ani’s uncommon action of organising such an event for his pet. He stated that the chief mourner had set a record in Nigeria, urging other dog owners to take a clue from him.

“Dogs are unique creatures. They are our friends. I am talking of dogs that are specially bred, not just any dog. I am so happy to be part of this occasion because it is not easy for anybody to come up with such an idea. If you can show love to a pet, it shows you can do better with humans. This organiser has just lifted the benchmark. You will witness more celebrations of dog’s deaths henceforth,” he assured.

Dr Dotun Ransome-Kuti also at the event, said what Ani did was great. He joined others to champion the crusade of treating dogs like human beings. According to him: “I think this is the first time anybody is doing something of this magnitude. This may be the start of new things in our society that other people will begin to follow. The best friend you can ever have is a dog. Dogs shows unconditional love. All it knows is that you are his friend. If you beat a dog, it would still be your friend. However, you can get the best from a dog only when you first show love to the pet.”

Ekwukoma Peter, a dog owner, commended the organiser’s courage, saying that it was a call to other dog owners to show more love to the animal. He stated that the event was amazing and remarkable. He promised to conduct a burial ceremony when his dog passes on. He admitted, though, that he might be unable to do so on a grand scale like Ani.

Chris Ekpo, who lives the on the same Oshifila Street, said Papilo looked gentle but was quite brave as a security guard.

For Ralph John, Papilo was brave. His words: “I cried like a baby when the dog died. Since I was born, that was the first dog that I would ever encounter that would behave like a human being. Immediately Papilo knows you, it becomes your best friend.”

A minute of silence was observed in honour of the dog.

One of the guests, who identified herself as Mary, said she was too astonished to utter a word.

“I don’t really have anything to say, because I am totally surprised. That is why they say, wonders shall never end,” she told the reporter.