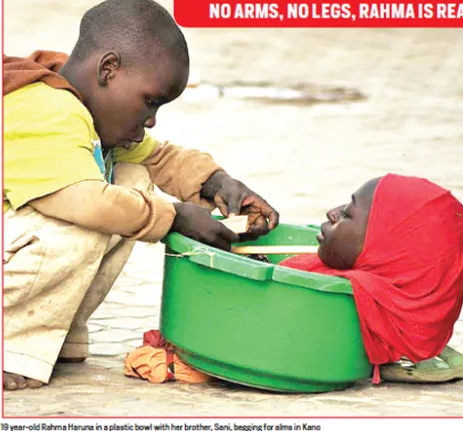 This is an exclusive report by The New Telegraph.

For residents of Lahdin Makole Village in Dawakiji Kudu Local Government Area of Kano State, some 40 kilometres outskirt of Kano, the pitiable sight of 19-year-old Rahma Haruna, sitting feebly in a green bowl to beg for alms everyday is heart shattering. But for them, the spirit is willing to assist her, but their pocket is not fat enough to render any substantial help to her. Her story: Rahma has no functional limbs.

What passes as limbs are some miniature features in the arm and leg positions. She only had a feeling of hands and legs for just six months. For the better part of her life, Rahma has been making a living in a green plastic bowl. With the support of her brother, Sani, who ferries her around day and night, she struggles with the realities of her situation from a circle-shaped synthetic bowl, which served as her begging cubicle. To say that life in the last 18 years has been traumatic for Rahma is stating the obvious.

Due to her condition, she has no friend, no formal education and she struggles with practicalities of everyday living, she can’t even brush her teeth, talk more of observing other hygienic rules. 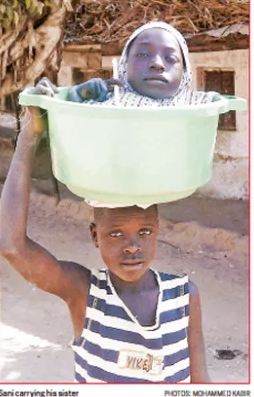 As she admitted, the support of her family members, especially that of her brother, who couldn’t go to school as well because of funding, has kept her going.

Speaking to New Telegraph on how his daughter came about her physical limitation, Rahma’s father, Mallam Haruna Muhammad, explained that the 19-year-old wasn’t born that way, adding that he gave up all effort at finding solution to her state when medical practitioners told him that they can’t find cure for his daughter’s ailment. Narrating what led to Rahma’s present state, he said: “When Rahma was just six months old, we woke up one day and saw her crying profusely. That was how the whole thing started.

“Medical checks reveal that she has bone marrowrelated problem, but nobody ever told us she can be cured. We couldn’t get a place that will provide us or even give an insight on how she can be healed.”

With the assumed failure of orthodox medicine in finding solution to his daughter’s plight, Haruna decided to seek solace in traditional ways and after much consultation via that means, he was informed that Rahma would never get cured because the spirits are the ones tormenting her. Thus, they decided to accept their ‘fate’ and live with the situation.

He said: “At the end, we admitted that what happened to our daughter is nothing but the works of spirits because at a time those invisible livings spoke to us and said that she will never get a cure.”

For Rahma¸ her inability to move from one place to another is perhaps the most horrendous. In a chat with New Telegraph, she said her biggest need is how she can go to school and probably get cured. Explaining how she has been faring with her condition in the past years, Rahma said: “It has never been easy, because in the last 19 years or so, I’ve been in this devastating condition without legs, or even comfortable hands that will allow me discharge my day to day needs and this is a great challenge.”

Giving kudos to her family members, she said: “I am lucky to have very understanding and loving parents. You know I can’t move from where I am kept; it is my brothers, sisters, mother or daddy that are always carrying me around. They are always trying their very best to see that they take care of whatever I want and this has run for the last 19 years. Certainly, this is disturbing.

“I am deeply in praises to my parents for not being tired of my condition and the way they treated me with passion and care. When I grew up, I saw how they suffered looking at all corners for medicine that will cure me. I was taken to different places, and this I learnt has been on even before I was a year old. All our belongings have gone over my health challenge; my father’s farmland was sold and he spent the proceeds on my treatment, but all to no avail.

My little earnings from the daily begging I engage in sometimes help in sustaining our home. My parents usually cry and get worried over my situation.” On how she came about the ailment, Rahma said: “I was made to understand that my sickness has some diabolical or spiritual tendencies, that Jens (Satan), might be behind whatever happened to me while I was an infant. “And here in our village, whatever the sorcerers say is usually the final on any issue.

But now, people are beginning to get acquainted to Western education and exposure, but that is exactly what I overheard that my illness has some touch from the spirits.”

Speaking on her interest for a formal education, she said: “I had never been admitted to any western school, maybe because of my condition. Because of my interest, my parents decided to enlist me in an Arabic School.” Expressing her longing to do things like any other human being, Rahma said: “What I want the most today is to see myself becoming just like any other person who walks with two legs and has hands to help in day-to-day livelihood.”

Expressing her disdain for marriage, she said: “For now, let me admit, I dislike marriage for the simple fact that no man will take care of me in this my present condition. My family has always been helping out and we hope that, one day, my trauma will come to an end.” Haruna appealed to government and philanthropists to come to the aid of her daughter, who according to him, “for now has no future.”

We give kudos to Rahma Haruna’s family for their undying love.

ISIS Forces Chief Executor To Kill His Own Mother For Advising Him To Flee Syria
Olu Falae: I Collected N100 Million ‘Bribe’ From Dasuki For My Party, SDP To Endorse Jonathan