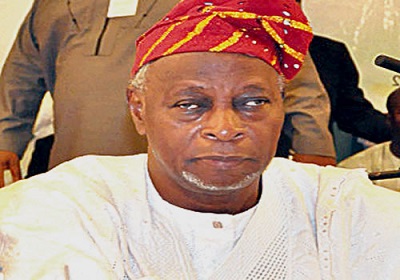 Former SGF Chief Olu Falae has opened up on why he benefited in the ongoing Dasukigate scandal.

The septuagenarian today told Daily Sun that he collected N100million from the N260million Chief Anenih received from the former NSA, Col Sambo Dasuki.

Falae argued that the money was given to his party, SDP to rally support for President Jonathan in the last presidential election.

“In the build up to the presidential election, the PDP approached the SDP which I chaired. The then ruling party solicited for our support in order for President Goodluck Jonathan to win the March 28 presidential election. “Anenih related with me as the chairman of the PDP BoT and I did same as the SDP National Chairman. He wrote to me as PDP BoT chairman and I wrote back as SDP National Chairman stating conditions/terms for the alliance.

“It is true that N100 million was given to my party to endorse and work for the Jonathan’s candidature in the 2015 election. We used the money for that purpose and we effectively campaigned for the PDP since we did not have presidential candidate in the election. The money was not for me.

“Thank God I’m a retired civil servant. I have all the documents to prove all that transpired between the two parties.” The former Finance Minister stated that there was no way he could know that the money was from arms fund. “With all the money PDP has and having spent 16 years in power, how would I know that the money was from the arms deal? No reference was made to the arms deal. So, they should not bring me into the arms issue.”

Olu Falae who sent a letter to the EFCC today didn’t explain how he spent the huge amount of money he received from Jonathan.