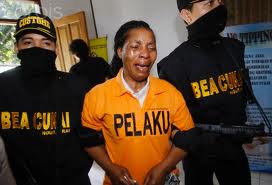 Not the actual picture

May 15, 2015 – Nigerian Woman, Student Sentenced To Death In Malaysia For Drug Trafficking

Yesterday, a verdict was reached in a drug trafficking case involving a Nigerian female student by the name of Mary George Unazi.

She was caught on May 10th, 2011 trafficking 765.9grams of Methamphetamine at the KL Int’l Airport in Malaysia.

Yesterday, she was found guilty of trafficking the banned substance. The presiding judge, Datuk Ghazali Cha said she had failed to convince the court that the bag with the banned drug wasn’t hers.

The 30-year-old Benue-born lady has been sentenced to death.