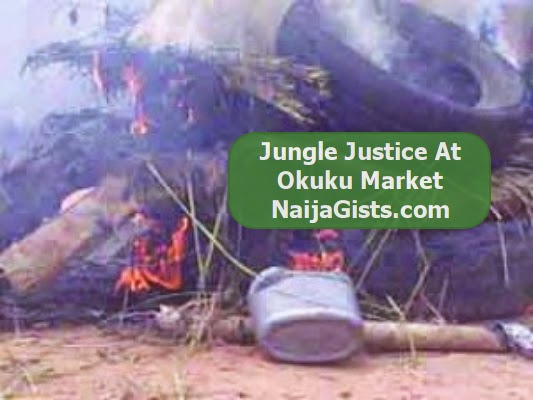 Four robbery suspects met their waterloo in Okuku, Yala Local Government Area in the northern part of Cross River State when an irate mob set them ablaze on Thursday evening for robbing traders in the popular Okuku market.

The young men, comprising three indigenes of the area and one from neighbouring Ebonyi State, were alleged to have attacked the traders from Akwa Ibom State, who come to the market every five days to buy foodstuff, at the market’s motor park and robbed them of the money they came with to buy foodstuff.

“Yesterday (Wednesday) was Okuku market’s eve (known locally as Ogbada) and many traders from Calabar, the Cross River State capital, Akwa Ibom and Rivers states usually come here on the eve of the market so that they could buy yams and garri early before everything is bought by others since the road from Calabar is far and bad and the traders usually sleep in the market park to wait for the next day,” Maria Ipuole, one of the eye witnesses told our reporter.

She said at about 7 p.m. on Wednesday when the bus carrying traders arrived the park, one of the robbers who was monitoring the arrival of the bus notified his gang members who came armed with locally made pistols and machetes, attacked the traders and dispossessed them of their money and phones while shooting sporadically.

One of the traders was killed in the process.

She told P.M.NEWS correspondent that after the robbery attack the boys escaped to Wodah, a village a few kilometres away from the market, where some people became suspicious as one of them was dressed like a lady. And when the villagers heard of the robbery at the market they apprehended them and the next day brought them to the motor park where a mob identified them as the robbers who attacked the traders the previous day and descended on them.

One of the angry youths said the suspects were first attacked with machete before being set ablaze to serve as a deterrent to other youths who may harbour such evil intentions.

“Okuku market is popular and traders come from all over the country to do business here and if our young men are allowed to turn the place to a robbery haven, then the market will soon cease to exist,” he told our reporter.

A source at the Divisional Police Station in Okpoma, Yala Local Government Headquarters, under whose jurisdiction Okuku is located, said before the police could arrive the market, the mob had already set the suspects ablaze.

Mr Hogan Bassey, the spokesman of the Cross River Police Command told our correspondent: “We have had reports like that from the area but we can only confirm the veracity of such information when the DPO comes to brief us or sends his briefs which would be within the week and that is when I can give you the details.”

Robbers have been terrorising the people of Okuku since last year. They wield guns and other weapons while carrying out their operations most times in the dead of the night.

Sometimes they break through ceilings of buildings to gain access into people’s homes, rob occupants at gun point and cart away valuables such as cash, expensive phones and TV sets.

The robbers, who are mostly youths of the community and their gang members from neighbouring local governments and Ebonyi State, also raid churches and cart away offerings.

Residents of Okuku said Thursday’s mob attack on four of them may bring about respite for them as they have been living in fear following the incessant attacks.

An idigene of the community, Wonah Eje, called on the police in the area to fish out the remaining robbers that may have gone underground and prosecute them so that the coomunity would have peace once again.