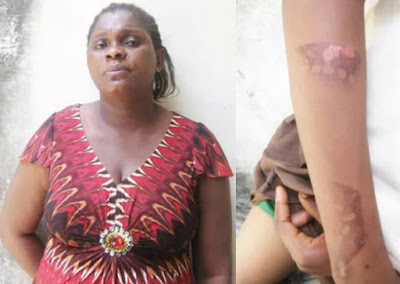 A big madam is currently cooling off in police station in Isolo for allegedly torturing her 13-year-old housemaid.

The suspect identified as Monica Momodu reportedly used a hot iron to make marks of torture on her 13-year-old house girl’s hand and leg at Oke Afa area of Isolo Lagos.

Egbado Sarah returned to school the following day only to be questioned by her teacher.

She confessed and the case was reported at  a nearby police station.

After her arrest, 39-year-old Mrs Momodu denied the allegation, she claimed that Sarah sustained injuries when the iron fell on her. According to her, Egbado Sarah suddenly jerked awake from sleep while ironing and in the process, the iron injured her leg and hand.

See the victim’s statement below;

My madam came and used the pressing iron to burn my hand and leg. I was afraid to tell anyone, but my teacher at school noticed the injuries when I went to school. My teacher called the police.”

Mrs Monica Momodu has been detained at Aswani Police Station. She will soon be charged to court.