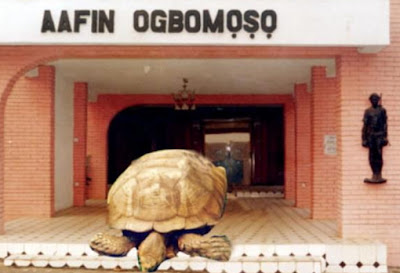 Alagba, a giant male land tortoise believed to be 330 years is still alive at the palace of Ogbomoso King in Oyo State.

The legendary tortoise who lumbers about in the palace is popularly called “the elderly one”. 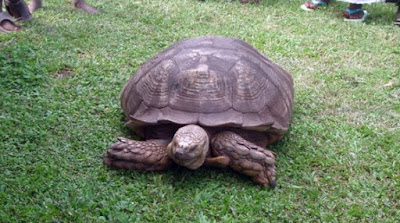 Since Alagba is believed to be older than everyone in Ogbomoso, permutations about its true age relies heavily on oral history. Its present age was arrived at by situating it with the period of the Soun who reigned then. Alagba was allegedly brought to the palace by Soun Ikumoyede Ajao, the third Soun of Ogbomoso, who is believed to have been born sometime in the late 16th century and who reigned in the 17th.

Mr. Ajamu Oluwatoyin, the secretary of the current Soun says dating of the kingship of Ogbomoso was started by the elite in 1797 during the reign of Oba Toyeje Akanni (1797 to 1825), the fourth Soun and one time Are Ona Kakanfo (the Yoruba Nation Generalissimo).

It is a sacrilege to call Alagba a mere tortoise in Ogbomosoland.