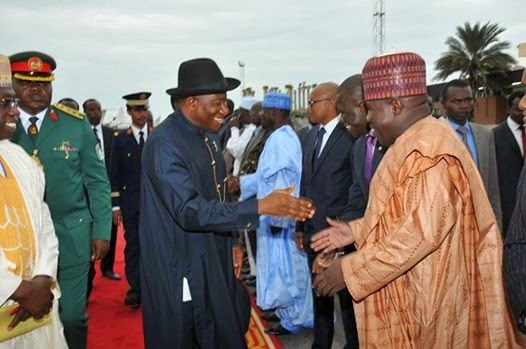 I said it once and I’ll say it again: A ti jona tan. What is my own inside sef? It should be: E ti jona tan. Somebody bought BMW bulletproof jeeps and was under investigation by everybody from the EFCC to the National Assembly to a panel he set up with his own hands, yet this ethically impecunious man flew with her to Israel, gyrating all over the Holy Sites with her like an Owambeland Kabiyesi visiting Europe. Now, there is a grave allegation of Boko Haram sponsorship against another somebody. Even your own DSS have managed to say he is a person of Boko Haramic interest and they are investigating him. That is the very moment you chose to fly to Chad with him for security consultations against Boko Haram!!! What manner of man is this? We were hoping to beg the Babalawo that is doing this man but we were told that he had gyrated to Sapele. We went to Sapele to look for the medicine man that is doing our President but they said he had gyrated to Calabar. We got to Calabar and they said the medicine man died last year and he threw the key into the river before he died. Who are we going to beg now?
Anyway, let me minister to him today:
1 Corinthians 15:33 “Do not be misled: Bad company corrupts good character.”
Psalm 1:1 “Blessed is the one who does not walk in step with the wicked or stand in the way that sinners take or sit in the company of mockers”
My son Jona, hear ye these words. Go and sin no more.